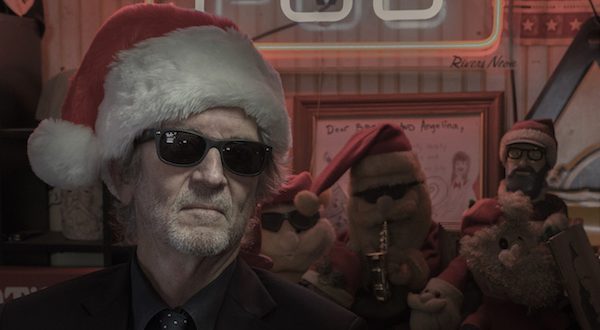 Rodney Crowell is set to release his first ever Christmas album, Christmas Everywhere, on November 2nd via New West Records. The 12-song set of all original songs was produced by Dan Knobler and features guest appearances from Vince Gill, Lera Lynn, the poet Mary Karr, Brennen Leigh, and more. Christmas Everywhere exhibits a unique and masterful approach to the traditional Christmas album from the legendary songwriter. While many selections exhibit the joy of the season, the collection also explores crass commercialization & loneliness exacerbated by the holidays, as well as songs co-written with his daughters and granddaughters. Crowell has read Clement Clarke Moore’s legendary “‘Twas The Night Before Christmas” to his children, and now grandchildren, on Christmas Eve for the past forty one years. A masterful storyteller himself, Christmas Everywhere commences with the lyrical prelude “Clement’s Lament (We’ll See You In The Mall),” which sets the tone for the album with “Peace, peace, peace on earth, good will to one and all. The season starts in August now, we’ll see you in the mall.” The title track, a duet with Lera Lynn, includes a dream sequence in which a child asks Santa for a time machine in which to go back and prevent John Lennon’s murder,” and the closing track, the endearing “All For Little Girls and Boys” was recorded in the early 80s and features his two oldest daughters.

Next Tuesday, October 23rd will see the release of a split vinyl single with Crowell’s New West Records labelmate JD McPherson. The 7 inch features Crowell’s “When The Fat Guy Tries The Chimney On For Size” as well as McPherson’s “Hey Skinny Santa!,” featured on McPherson’s own forthcoming Christmas album, SOCKS, out November 2nd as well. The single will be available at Independent Retail and will include a $2 coupon that can be put toward the purchase of Christmas Everywhere and SOCKS. Christmas Everywhere will be available across digital platforms, compact disc, as well as three vinyl variants with the standard edition available on coal colored, black and grey vinyl, red and white split-colored vinyl available at Independent Retail, and a red and green marbled vinyl edition available for pre-order now exclusively via NEW WEST RECORDS.

In celebration of Christmas Everywhere, Crowell will support Amy Grant & Vince Gill’s unprecedented twelve-night “Christmas at the Ryman” stand in Nashville, TN beginning November 28th. He has also announced additional tour dates throughout the Spring of next year (please see all dates below).

Music editor for Nashville.com. Jerry Holthouse is a content writer, songwriter and a graphic designer. He owns and runs Holthouse Creative, a full service creative agency. He is an avid outdoorsman and a lover of everything music. You can contact him at JerryHolthouse@Nashville.com
Previous The Wild Feathers Debut Video Filmed At The Ryman
Next New Track From The Late, Great, Charles Bradley