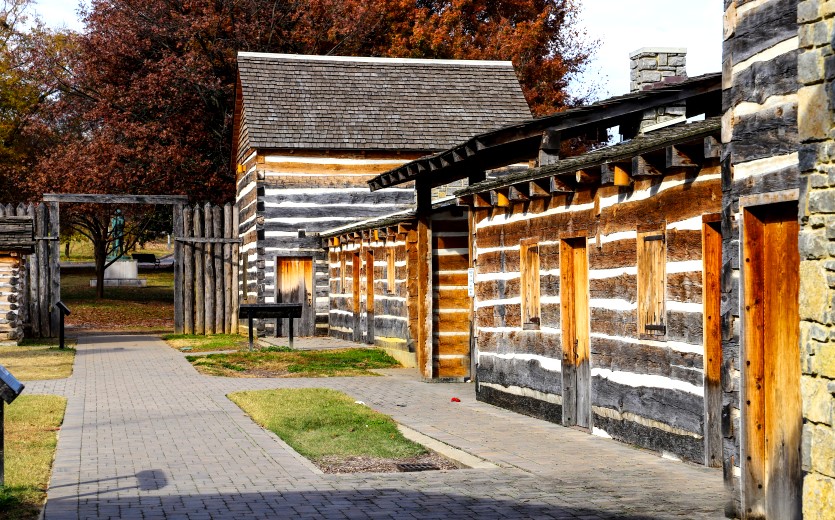 The history of Nashville began with the Native Americans of the Mississippian culture who lived in the area from approximately 1000 to 1500 A.D. They were the descendants of the prehistoric inhabitants who first came to the Tennessee region more than 12,000 years ago. The Mississippians hunted, grew corn, built huge earthen mounds and painted impressive pottery before being replaced by tribes such as the Cherokee, Chickasaw and Shawnee.

In 1689, French-Canadian explorer Martin Chartier (1655–1718) established a trading post on the Cumberland River, near the present-day site of Nashville, where his son Pierre Chartier was born in 1690. In 1714, a group of French traders under the command of Jean du Charleville (aka Charles Charleville) established a trading post at the present location of downtown Nashville which became known as French Lick. These settlers successfully traded fur with Native Americans, but by the 1740s the settlement had been abandoned.

In 1779, explorers James Robertson and John Donelson led a party of Overmountain Men to the former site of French Lick, and constructed Fort Nashborough. The settlement was named for Francis Nash, the brigadier general and American Revolutionary War hero who was killed at the Battle of Germantown in Pennsylvania two years earlier on October 7, 1777. Nashville, North Carolina; Nashville, Georgia, and Nash County, North Carolina are also named in Francis Nash’s honor.

Because of its strategic location as a port on the Cumberland River, the settlement prospered, shortened its name to Nashville (1784), and became a major railroad center. By 1800, the town had 345 permanent residents that included 136 enslaved African-Americans and 14 free African-Americans. In 1806, Nashville was incorporated as a city and became the county seat of Davidson County. In 1843, Nashville became the capital of the State of Tennessee (16th state in 1796).

Before the American Civil War (1861-1865), Nashville was the center of numerous plantations cultivating tobacco and hemp as well as the breeding and training of thoroughbred horses. The city ranked as one of the wealthiest southern capitals and led the South in iron production.

A cholera epidemic struck Nashville in 1849–1850, taking the lives of 627 Nashvillians including former President James K. Polk who is buried on the Capital grounds.

After the Civil War began in 1861, Nashville’s significance as a shipping port and rail center made it a strategic target to control the region’s river and railroad transportation routes. In February 1862, Nashville became the first Confederate state capital to fall to Union troops, and Tennessee was occupied by Union troops for the duration of the war. The Battle of Nashville (December 15–16, 1864) was a major Union victory and sealed the fate of the Confederacy. More than 64,000 Confederate soldiers and 59,000 Union soldiers died in Tennessee.

In 1868, the Nashville chapter of the Ku Klux Klan was founded by Confederate veteran John W. Morton. Reportedly, he initiated General Nathan Bedford Forrest into the organization. Chapters of the KKK formed throughout the state and the South, and are a dark stain on the history of Nashville. The Klan opposed voting and political organizing by freed Blacks, and tried to control their behavior using intimidation, violence and murder.

In 1873, Nashville was struck by another cholera epidemic resulting in approximately one thousand deaths.

By this time, Nashville had economically recovered from the devastation of the Civil War and prospered during the latter half of the 19th century through river shipping, trading and manufacturing. Wealthy Nashvillians built majestic, neo-classical-style buildings including a replica of the Greek Parthenon in Centennial Park.

Nashville’s reputation as Music City began with The Church of Country Music, the Ryman Auditorium. Originally opened as the Union Gospel Tabernacle, the first concert was held there in 1892. John Phillip Sousa played his first performance at the Ryman in 1894.

The Grand Ole Opry started as the WSM Barn Dance in the fifth-floor radio studio of the National Life & Accident Insurance Company in downtown Nashville on November 28, 1925. By June 1943, it became so popular that it moved to the Ryman Auditorium and Nashville’s recognition as Music City was established worldwide. Over the years, the Grand Ole Opry has featured Country music stars such as Hank Williams, Patsy Cline, Ronnie Milsap, Garth Brooks, Keith Urban and Carrie Underwood.

In the early 1960s, due to Jim Crow laws, Tennessee still had racial segregation of public facilities including lunch counters, department store fitting rooms, hotels and restaurants. Between February 13 and May 10, 1960, a series of sit-ins were organized at lunch counters in downtown Nashville by the Nashville Student Movement and Nashville Christian Leadership Council as part of a larger movement in the southeastern United States to end racial segregation of public facilities. Nashville Mayor Ben West supported the desegregation of lunch counters and Congress passed civil rights legislation in 1964 and 1965 that effectively ended Jim Crow.

Nissan Stadium (formerly Adelphia Coliseum and LP Field) was built after the National Football League’s (NFL) Houston Oilers agreed to move to Nashville in 1995. The NFL team debuted here in 1998 at Vanderbilt Stadium, and Nissan Stadium opened in the summer of 1999. The Oilers changed their name to the Tennessee Titans and finished the season with the Music City Miracle and a close Super Bowl. The St. Louis Rams won in the last play of the game.

In 1997, Nashville was awarded a National Hockey League expansion and named their team the Nashville Predators. Since the 2003–04 season, the Predators have made the playoffs in all but three seasons. In 2017, they made the Stanley Cup Finals for the first time in franchise history, but  fell to the Pittsburgh Penguins, 4-2, in the best-of-seven series.

Between May 1 and 7, 2010, Nashville was flooded as part of a series of 1,000-year floods throughout Middle and West Tennessee. The Cumberland River crested downtown at 51.86 feet (flood stage is 40 feet) and it was the worst flood in the history of Nashville. It caused extensive damage to many historic and significant structures including the Grand Ole Opry House, Gaylord Opryland Resort & Convention Center, Opry Mills Mall, Schermerhorn Symphony Center, Bridgestone Arena, and Nissan Stadium.

Q. On what Eve was Nashville founded?
A. Nashville was founded on Christmas Eve 1779.

Q. Who was Nashville’s first celebrity?
A. Davy Crockett (1786-1836) played fiddle and entertained Nashvillians with stories of his wild adventures before he was killed at The Alamo.

Q. Name the 7th and 11th presidents that lived in the Nashville area.
A. Andrew Jackson and James K. Polk.

Q. What is the shape of the driveway at President Andrew Jackson’s home Hermitage?
A. The drive is in the shape of a guitar.

Q. What was the original name of the Grand Ole Opry?
A. The WSM Barn Dance.

Q.What was the longest home of the Grand Ole Opry?
A. The Ryman Auditorium.

Q. Portions of 16th and 17th Avenue South are known as what Nashville area?
A. Music Row.

Q. Who became famous as the featured female singer on Porter Wagoner’s Show and now has her own theme park in the Smokey Mountains?
A. Dolly Parton.

Q. What popular female singer started out as a tour guide at the Country Music Hall of Fame?
A. Kathy Mattea.

Q. What singer used to wash dishes at the Nashville Palace and is now credited as beginning the movement of New Traditionalists?
A. Randy Travis.

Q. The song “I Was the One” began a long relationship between Elvis Presley and what group?
A. The Jordannaires.

Q. According to the Lovin’ Spoonful, how many guitar pickers are there in Nashville?
A. 1,352.

Q. Who is the only country recording artist to be elected twice to the Country Music Hall of Fame?
A. Roy Rogers (1911-1998).

Q. After drinking a cup of locally produced coffee in Nashville, which U.S. president coined the phrase “Good to the last drop!”?
A. Theodore Roosevelt (1858-1919).

Q. Although this now famous coffee is still enjoyed everywhere, it was served for the last time at the hotel where it got its start on December 25, 1961. What was the name of the Nashville hotel?
A. The Maxwell House Hotel.

Q. Who is the top-selling Country music artist of all time?
A. Garth Brooks with over 170 million albums sold (2021). Taylor Swift, who is Pop/Country, has sold over 200 million.

Q. What famous Nashville candy is made of chocolate, caramel, marshmallows and peanuts?
A. Goo Goo’s.

Nashville.com
The Visitors Guide to Nashville!