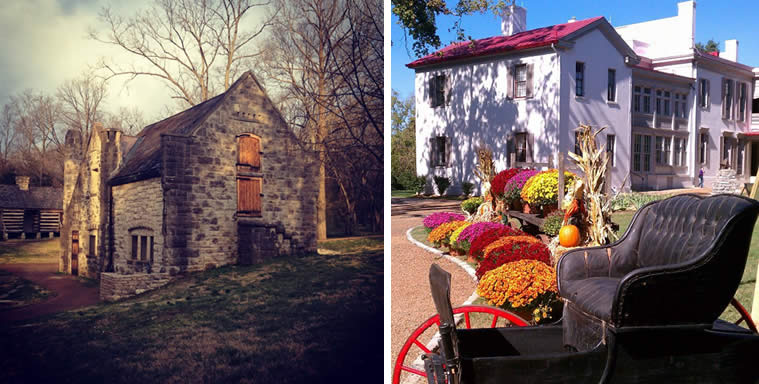 Check HERE for Special Belle Meade Plantation Ticket Savings!  The Belle Meade Plantation began in 1807 when Virginian John Harding bought Dunham’s Station log cabin and 250 acres on the Natchez Trace. For the next 100 years, the Harding family prospered, building their domain into a 5,400 acre plantation that was world renowned as a thoroughbred horse farm. In the early years, Harding boarded horses for neighbors such as Andrew Jackson, and he was breeding thoroughbreds by 1816. He shipped grain to Charleston and New Orleans, and owned large tracts of land in Arkansas and Louisiana. In 1853 John Harding’s son, William Giles Harding, completed the mansion, doubling its size and adding the front porch and columns, which are solid limestone. The Belle Meade Plantation became a stunning example of the grandeur of the South’s Greek Revival Ante-Bellem architecture. 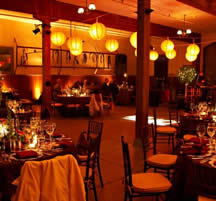 Harding was very wealthy, very pro-secession and donated $500,000 to the Southern cause. When the Federals occupied Nashville in February 1862, Harding was arrested and sent north to be imprisoned in Fort Mackinac, Michigan. His wife, Elizabeth McGavock, was left to tend the plantation. In September, Harding was released on parole and returned to Belle Meade. The Belle Meade Plantation was headquarters for Confederate Gen. James R. Chalmers of Nathan Bedford Forrest’s cavalry command prior to the Battle of Nashville (December 1864). On the first day of the battle, Union soldiers burned the Rebel wagons parked at the racetrack while Chalmers was elsewhere. Returning to Belle Meade, Chalmers’ men charged the Yankees and drove them back before running into an enemy infantry camp. The Yankees fired as the cavalry galloped back past the mansion, where Selene Harding, nineteen, waved a handerchief despite the bullets flying around her. Bullet holes can still be seen in the porch columns. 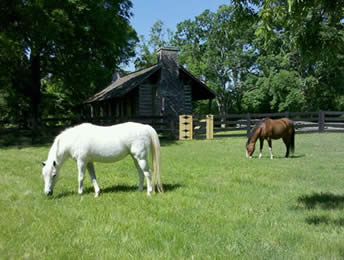 After the war, William Harding turned over control of the farm to his son-in-law, William Jackson, a West Point graduate who had commanded a cavalry division under Gen. S.D. Lee in Mississippi and Louisiana. Under Jackson’s tutelage, Belle Meade (French for “beautiful meadow”) became an internationally renown Thoroughbred farm and showplace. The farm sold breeding stock of ponies, Alderney cattle, Cotswold sheep, and Cashmere goats. The vast estate also featured a 600-acre deer park. At its sale in 1904, Belle Meade was the oldest and largest thoroughbred farm in the United States. In 1953, Belle Meade Mansion and eight outbuildings on 30 acres were deeded to the Association for the Preservation of Tennessee Antiquities. Today, the Belle Meade Plantation is one Nashville’s most popular attractions and managed by the Nashville chapter of the Association.

Belle Mead Plantation highlights include the 1853 Mansion (restored to the sumptuous elegance of the Victorian era), the 1890 Carriage House and Stable, and the 1790 Log Cabin, one of the oldest housed in Tennessee.