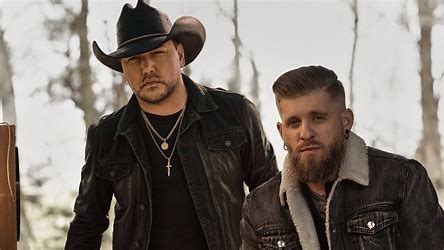 In the last decade, Brantley Gilbert and Jason Aldean have swapped songs, toured together, and remained friends and advocates for each other’s careers, leaving fans eager to see the two Georgia-natives join forces for a song. The wait is finally over with the release of their collaboration: “Rolex On A Redneck.” Listen to the song above.

“Aldean was one of those guys coming up that I looked up to as he’s a great song guy,” elaborates Gilbert. “Back in the day, he cut a couple songs of mine, ‘My Kinda Party’ and ‘Dirt Road Anthem,’ and he turned both of those into big ole hits, and I’ll forever be thankful for that.”

“Writing a song and having Aldean cut it is one thing, and that’s something I’ll always be thankful for and is a blessing in itself,” Gilbert adds. “But to be able to do a song with him, well, it’s a whole other level.”

“Brantley and I go way back,” shares Aldean. “This song is just a straight up a banger – it‘s cool to be part of it with him.”

“We go on a writer’s retreat every year southwest of Houston, Texas, and we do a little bit of hog hunting and write a bunch of songs. I was actually in the other room when this one started,” shares Gilbert. “Taylor Phillips called me over, and he, HARDY, Brock Berryhill and Randy Montana were in the bus writing ‘Rolex® On A Redneck.’ I put my two cents on it, and it was one of those songs that when you hear it for the first time, it’s just fun.”

“It’s a little outside the box – it’s a sound we haven’t really done in a while, so it was really cool to be able to jump on it,” he explains. “We’re super proud of it, and we just hope folks dig it.”

Along with joining writer retreats with new friends and longtime collaborators, Gilbert has been back in the studio preparing new music to be announced later this year.

Music editor for Nashville.com. Jerry Holthouse is a content writer, songwriter and a graphic designer. He owns and runs Holthouse Creative, a full service creative agency. He is an avid outdoorsman and a lover of everything music. You can contact him at JerryHolthouse@Nashville.com
Previous Tin Pan South Begins
Next Miranda Lambert Announces Las Vegas Residency