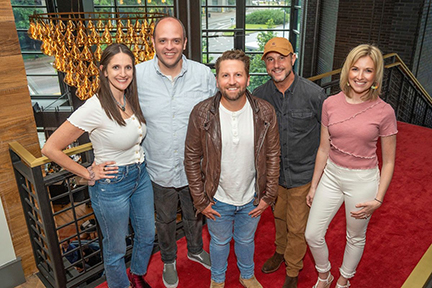 Songwriter, producer, and recording artist Jake Rose has signed an exclusive global publishing agreement to continue his relationship with Endurance Music Group (EMG). Rose is the frontman of the alternative rock band New Medicine as well as a rising solo country artist. His first country single, “Sleeves,” debuted on CMT and Sirius XM’s “The Highway” and has had more than four million streams to date. His current single, “WD-40 & Beer,” is featured in a national advertising campaign by Keystone Light. As a songwriter, he has penned recent singles and cuts by Jimmie Allen, Florida Georgia Line, Brian Kelley, Blake Shelton, Keith Urban, and more.

Rose said of the signing, “I’m so excited to begin my next chapter as a songwriter, artist, and producer with Endurance. They have championed every aspect of my career, and I’m grateful for the opportunity to continue to work with a team that truly believes in me and what I do. I know together we are going to accomplish great things, starting with great songs.”

EMG President Michael Martin adds, “Jake’s originality and creativity as a songwriter set him apart in this business. As a writer, producer, musician, and artist, he effortlessly blends his country and rock influences in a way that speaks to the heart of both genres. Jake’s energy and passion shine through in all his creative endeavors and are infectious to those around him. The EMG team is thrilled to continue our partnership with Jake, and we look forward to his continued impact in country music and beyond.”

Rose hails from a pumpkin farm in Hamel, Minn., where he grew up on burned CDs passed around between friends with everything from Eminem to Kenny Chesney to Slipknot on them. He’s the product of a generation that had many different types of music at its fingertips, and all of those influences come out in his writing. As both a rock and country artist, a producer, and a songwriter, Rose wears many musical hats, and likes it that way. He is currently working on a new Jake Rose EP slated to release this summer, in addition to a New Medicine EP expected in the fall, all while writing and producing for other artists, including Brian Kelley, Redferrin, and Las Vegas rock band Adelitas Way. As a touring artist, Rose has played over 500 shows and has opened for a wide range of headliners, from Tim McGraw and Maren Morris to Avenged Sevenfold, Disturbed, and Shinedown.

Music editor for Nashville.com. Jerry Holthouse is a content writer, songwriter and a graphic designer. He owns and runs Holthouse Creative, a full service creative agency. He is an avid outdoorsman and a lover of everything music. You can contact him at JerryHolthouse@Nashville.com
Previous Circle Network Announces Never-Before-Seen Austin City Limits Interviews
Next Trisha Yearwood Announced As 2022 CRB Artist Achievement Award Recipient