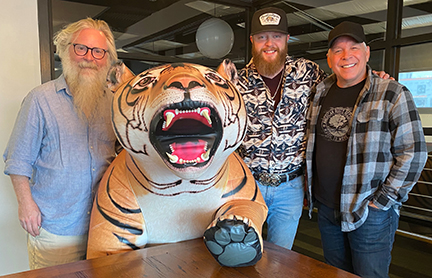 “David Macias is a titan in this industry and I’m stoked to have him and his team behind this project. This album means the world to me and I can’t wait to get it out to the masses!” Jacob Bryant shared.

“The first time I heard Jacob’s music, I couldn’t believe how great it was. I was immediately taken with his strong vocals and incredible songwriting. It’s not often that I hear something where the song is stuck in my head after one listen, and that happened with several of his songs. I think Jacob has it in him to be a major star, and I’m proud that he and his team picked us to help him realize his promise,” shared Macias.

The singer-songwriter is a true road warrior and spent hundreds of thousands of miles on the road playing in honky tonks, fairs and even the Mother Church of Country Music, Nashville’s Ryman Auditorium. Bryant has built an strong fan base while developing his trademark, deeply personal songs. After losing his mother in 2010, the budding songwriter battled depression and anxiety, self-medicated with alcohol and cocaine and ultimately suffered a heart attack at the age of just 19 – but he transformed the pain into passion.

Recently, Bryant and his wife Britney welcomed their second child and he reflected on life’s journey. “I’m so thankful I’ve been able to spend more time with my children. With being off the road (during the pandemic), it’s given me the space to reflect and to grow, to get better as both an artist and a person,” he reflects. “In the past, I’d go through my daily life searching for normal, and my normal has been making music that lets the pain out,”he continues.“A lot of artists don’t talk about what they’re going through, but I want other people to know they’re not alone. Now I find myself writing more about the joys of life”.

Music editor for Nashville.com. Jerry Holthouse is a content writer, songwriter and a graphic designer. He owns and runs Holthouse Creative, a full service creative agency. He is an avid outdoorsman and a lover of everything music. You can contact him at JerryHolthouse@Nashville.com
Previous Tootsie’s Will Celebrate 60th Birthday With Free Concert
Next WATCH: Trace Adkins, Luke Bryan and Pitbull In “Where The Country Girls At”