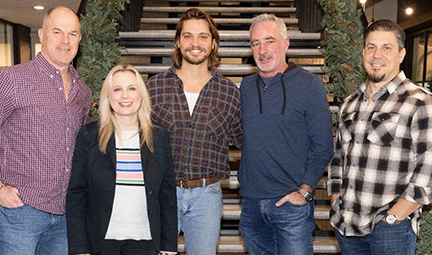 Universal Music Group Nashville announced the signing of Luke Grimes in association with Range Music. Grimes, widely known for his role as Kayce Dutton on hit show Yellowstone, has made no secret of his love of music speaking of it often in interviews over the years. The Ohio native grew up the son of a Pentecostal pastor and playing music in church, learning drums at church camp then next picking up guitar and piano. He later became a drummer and songwriter for a country band based in Los Angeles, however, acting pushed its way to forefront of his career. While finding success as an actor in films including The Magnificent Seven and American Sniper, Grimes always held onto his passion for creating music.

“As an actor, Luke Grimes has effortlessly brought the cowboy lifestyle to the forefront of American culture,” says UMGN President Cindy Mabe. “As a country music artist, Luke has tapped into that same honesty and authenticity to capture a raw grit and pure depth of artistry that will expand the sound and reach of country music. We are so excited and proud to welcome Luke Grimes to Universal Music Group Nashville.”

“Luke is a special spirit who puts honesty above all else in his art,” says Range Music Managing Partner Matt Graham. “We at Range are excited to partner with Brian, Cindy and the rest of the UMG team to help him fulfill his dreams of sharing his songs with country music fans.”

Growing up with the music of Johnny Cash, Merle Haggard, and Willie Nelson, and being inspired now by artists like Colter Wall, Ruston Kelly, Paul Cauthen, and the late Townes Van Zandt, Grimes is finding his own artist voice and style. Grimes spends his time away from set spinning his favorite country albums and songwriting at home in Montana. He has also spent many months living in Nashville to write with some of Music Row’s best including Jonathan Singleton, Tony Lane, Randy Montana, Brent Cobb, Jamey Johnson, Love Junkies, Josh Osborne, Jon Randall, and Jessie Alexander, and he is working with Grammy Award-winning producer and songwriter Dave Cobb on his debut album for Range Music/Mercury Nashville.

Music editor for Nashville.com. Jerry Holthouse is a content writer, songwriter and a graphic designer. He owns and runs Holthouse Creative, a full service creative agency. He is an avid outdoorsman and a lover of everything music. You can contact him at JerryHolthouse@Nashville.com
Previous ROMP Festival Announces Initial Lineup
Next Kenny Foster Celebrates British CMA International Single of the Year