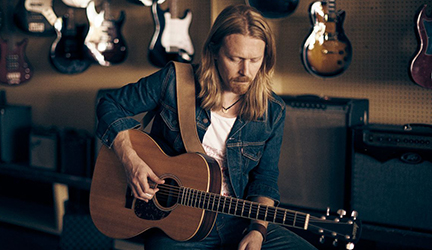 Music industry friends and colleagues gathered over the weekend in Nashville to celebrate Foster’s award, one of just two honors eligible for non-British artists at the ceremony.

“It means so, so much to me how the British country music community has embraced me and my music,” Foster says. “It feels a bit like coming home every time I’m over. The way they listen, the kindness they show, it honestly…it’s made this vagabond feel very seen.”

“Copy, Paste, Repeat” was co-written with Daisy Mallory, produced and recorded by Mitch Dane and engineered by Vance Powell at Sputnik Sound in Nashville. The song was originally released over the summer as a single from Somewhere in Middle America (Oct. 21)—the album addresses the beauty and the limitations, the experiences and the challenges of having a complicated relationship to a hometown, and the polarizing mindsets that increasingly define our times.

The album finds Foster wrestling between two minds—the one that wishes he’d never left and the one that knows full well it was the only choice there was to make. Born and raised in Joplin, Missouri, Foster didn’t set out to make this complex and deeply personal territory the focus of the record but gradually became aware of what was feeling most urgent to him. The album examines the struggle between ambition and reality in songs like “Dreams Change” and “Farmer,” and wrestles with his attachment to old-school values in an advancing society in “For What It’s Worth,” presenting himself as “a long-form man in a sound bite world.”

As a philosophy major at Missouri State University, Foster fell in love with the emo and alternative rock of Get Up Kids, Third Eye Blind and Dashboard Confessional. He transferred to Belmont University in Nashville, working in and around the music scene after graduating, writing songs for himself and keeping close ties to his roots—after a storm ravaged Joplin in 2011, he responded with the moving benefit single “Hometown.” In the 14 years since his move, he’s continued to release his music independently, including 2017’s Deep Cuts, which expanded his fanbase further than he could imagine—he performed in 18 different countries in the following years. Foster’s unorthodox career has seen him sharing the stage with artists including Maren Morris, Kacey Musgraves, Brothers Osborne, and Old Dominion.

Music editor for Nashville.com. Jerry Holthouse is a content writer, songwriter and a graphic designer. He owns and runs Holthouse Creative, a full service creative agency. He is an avid outdoorsman and a lover of everything music. You can contact him at JerryHolthouse@Nashville.com
Previous Yellowstone’s Luke Grimes Signs Record Deal With UMG Nashville
Next Americana Announces Top 100 Radio Albums & Singles Of 2022