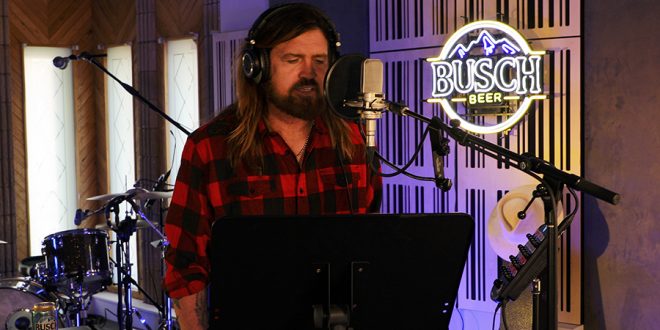 Busch, the beer brewed for the great outdoors, has extolled the beauty of America’s landscapes using music and song since its founding in 1955, developing iconic jingles for its ad campaigns such as ‘Head for the Mountains’ in the 1980s. Today, inspired by the creativity Americans across the country showed while staying indoors this spring, Busch is announcing a new campaign to bring that very song to the fore again, and is enlisting the support of Billy Ray Cyrus and one lucky Busch fan to do so.

Starting today through July 5, Busch is giving its fans the chance to remake its ‘Head for the Mountains’ jingle, with one person taking home a $10,000 contract from Busch to have their version featured in an upcoming ad. To help determine the winner, Busch is partnering with Billy Ray Cyrus, who kicked off the campaign with a rendition of his own. In addition to identifying the winning entry, Cyrus will help him or her hone their skills with a 1:1 coaching lesson before recording the final version.

“Every Busch fan has undoubtedly heard ‘Head for the Mountains’ and can probably recall seeing the ad on TV back in the day,” said Daniel Blake, VP of Value Brands at Anheuser-Busch, “We wanted to give these fans the opportunity to tap into their creativity and record their own rendition, and with a legend like Cyrus providing inspiration and coaching the winner, we’re eager to hear an updated version almost 40 years later.”

“I have fond memories of those ads. The ‘Head for the Mountains with Busch’ chorus is totally nostalgic!” said Billy Ray Cyrus, “We had a great time in the studio recording the song and the opportunity to work alongside the winner to help hone their skills is really cool.”

The lyrics of the ‘Head for the Mountains’ song can be found on the Busch Instagram page @BuschBeer and are written out on Busch.com/mountains. To enter, fans can submit their version of the jingle on Facebook, Instagram, Twitter or YouTube using the hashtags #HeadForTheMountains and #Contest. Submissions are open from June 23 – July 5, 2020.

Music editor for Nashville.com. Jerry Holthouse is a content writer, songwriter and a graphic designer. He owns and runs Holthouse Creative, a full service creative agency. He is an avid outdoorsman and a lover of everything music. You can contact him at JerryHolthouse@Nashville.com
Previous Steve Wariner Draws Nearly One Million To Wariner Wednesday
Next Lindsay Ell’s Sophomore Album “Heart Theory” Coming August 14