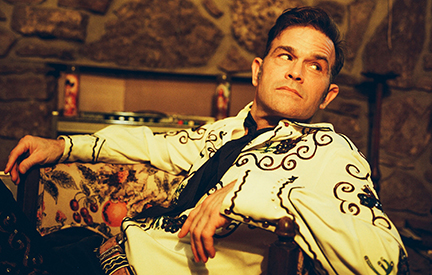 WATCH: Waylon Payne, “All The Trouble”

Waylon Payne performs an acoustic rendition of his haunting song “All The Trouble” in a new video out today (7.16).

Originally recorded by Lee Ann Womack, “All The Trouble” was written by Payne, Womack and Adam Wright, and earned a GRAMMY nomination for Best American Roots Song in 2019. The performance video showcases Payne’s smoldering vocal ability, backed by blues-rock guitar.

Payne’s forthcoming album ‘Blue Eyes, The Harlot, The Queer, The Pusher & Me’ is available Sept. 11 via Carnival Recording Company/Empire. Payne recorded the record primarily at Southern Ground Nashville, a converted century-old church building just off Music Row that once housed Monument Studios. Payne’s mother, country singer Sammi Smith, cut her iconic version of Kris Kristofferson’s “Help Me Make It Through the Night” at Monument. When Payne recorded his vocals, he says, “I stood in the same spot she stood and sang while she was pregnant with me.”

Music editor for Nashville.com. Jerry Holthouse is a content writer, songwriter and a graphic designer. He owns and runs Holthouse Creative, a full service creative agency. He is an avid outdoorsman and a lover of everything music. You can contact him at JerryHolthouse@Nashville.com
Previous Erv Woolsey Forms New Record Label
Next Marcus King’s “Four of a Kind, Live From Nashville” Flawless First Show