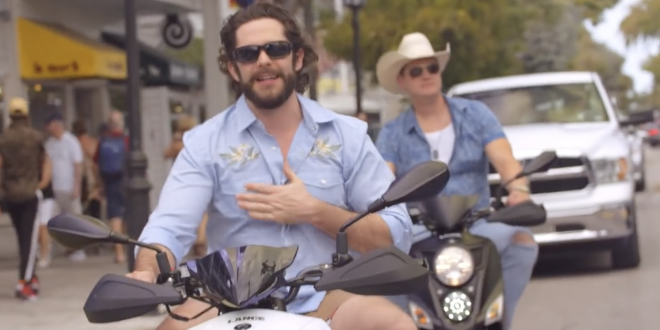 “We wrote this song to be fun and uplifting and wanted to take that same energy into the video,” Thomas Rhett said. “Jon and I had a blast filming this a few weeks ago in Key West, and I hope it brings a smile to people’s faces.”

5x ACM Awards nominee Thomas Rhett’s GRAMMY-nominated fourth studio album CENTER POINT ROAD is a return to his roots and connects fans to his past, weaving together autobiographical stories with familiar sounds that have propelled his meteoric career. Center Point Road has spawned two No. One hits, PLATINUM lead single, “Look What God Gave Her” which was first introduced on SNL and “Remember You Young,” following a slew of RIAA-certified PLATINUM and GOLD chart-toppers, bringing Thomas Rhett’s No. One tally at Country radio to 14. Thomas Rhett earned his second CMA Triple Play award for penning three No. One songs within a 12-month period this year and was named Country radio’s most played artist of 2018, adding to his collection of trophies from the Country Music Association, Academy of Country Music, Billboard Music Awards, CMT Music Awards and more. Later this year, he will kick off his headlining THE Center Point Road.

Music editor for Nashville.com. Jerry Holthouse is a content writer, songwriter and a graphic designer. He owns and runs Holthouse Creative, a full service creative agency. He is an avid outdoorsman and a lover of everything music. You can contact him at JerryHolthouse@Nashville.com
Previous The Bellamy Brothers Parody Their Biggest Hit Songs
Next Lee Brice And Rob Hatch Launch Pump House Records