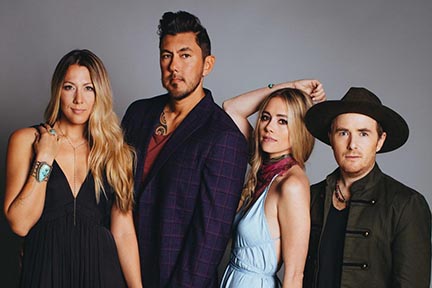 Triple Tigers recording artists Gone West released the animated lyric video for the feel-good track “Slow Down”, which premiered today. The track is an instant-grat off their debut album Canyons due in June and was co-written by Gone West and Jamie Kenney and features a guitar solo by Vince Gill. The lyric video is the animated story of a couple taking a step back from all the distractions of everyday life and taking the time to appreciate each other. The track is #1 on Radio Disney Country Playlist.

“Slow Down is very fitting for what we’re all experiencing during quarantine. We all truly have to slow down right now and soak up the ones we love and soak up the down time. Trying to find a healthy balance of resting/resetting and being productive and seeing how we can be helpful all at the same time. Getting exercise in and trying to eat healthy is what I hope everyone is able to do in the midst of all this. We are sending our love to everyone around the world.” said Colbie Caillat.

Justin Kawika Young continued, “We wrote Slow Down with Jamie Kenney and appropriately enough- it was a SLOW process. We started and bailed on three other song ideas and it was about 4 hours in before this song poked its head out. We wanted it to be a love song that could be applied to not only someone specific you love that helps you slow down and appreciate things, but also anything in life that encourages you to do that.”

Jason Reeves added, “We love the unique style of the animation for this video! It invokes the kind of surreal magic we hope this song expresses and it pulls you into an alternate world. Just like the way love pulls you into another realm: strange, beautiful and unknown.”

“We hope the fans that see this video will be inspired to take a deep breath and hold on tight to the people and memories they love as we are all in this moment together. A moment in time where the entire world has slowed down. Hopefully we can all reflect on what’s truly important and roll forward with that knowledge.” concluded Nelly Joy.

Gone West is comprised of Colbie Caillat, Jason Reeves, Nelly Joy and Justin Kawika Young who together have more than 5 billion combined streams. Gone West made their country music debut last year with a whirlwind year with the release of their EP Tides, which impacted immediately and earned 31.1 million streams for the project and reached No. 7 on the Billboard Heatseekers Album chart. Their hit single “What Could’ve Been” single currently sits at #29 on Billboards Country Airplay Chart with over 30 Million streams

Music editor for Nashville.com. Jerry Holthouse is a content writer, songwriter and a graphic designer. He owns and runs Holthouse Creative, a full service creative agency. He is an avid outdoorsman and a lover of everything music. You can contact him at JerryHolthouse@Nashville.com
Previous Brett Young Scores His Sixth Number One
Next Wood Brothers Launch GoFundMe Campaign For Middle Tennessee Tornado Victims