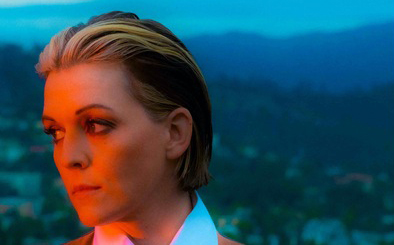 In These Silent Days, the new studio album from six-time Grammy Award-winning singer, songwriter Brandi Carlile, will be released October 1 The album’s first single, “Right On Time,” featuring a music video directed by Courteney Cox, is premiering today. Watch above.

Of the album, Carlile shares, “Never before have the twins and I written an album during a time of such uncertainty and quiet solitude. I never imagined that I’d feel so exposed and weird as an artist without the armor of a costume, the thrill of an applause and the platform of the sacred stage. Despite all this, the songs flowed through—pure and unperformed, loud and proud, joyful and mournful. Written in my barn during a time of deep and personal reckoning. There’s plenty reflection…but mostly it’s a celebration. This album is what drama mixed with joy sounds like. It’s resistance and gratitude, righteous anger and radical forgiveness.
It’s the sound of these silent days.”

Inspired by the mining of her own history while writing this year’s #1 New York Times Best Selling memoir Broken Horses (Crown), In These Silent Days was conceived of while Carlile was quarantined at home with longtime collaborators and bandmates Tim and Phil Hanseroth. The ten songs chronicle acceptance, faith, loss and love and channel icons like David Bowie, Freddie Mercury, Elton John and Joni Mitchell—the latter two who, by some sort of cosmic alignment of the stars, have turned out to be close friends in addition to being her biggest heroes and inspirations.

In addition to their work as a band, Carlile and the Hanseroth twins remain committed to social activism and advocacy. Together they are founders of the Looking Out Foundation, which amplifies the impact of music by empowering those without a voice with varied initiatives including campaigns focused on Children in Conflict/War Child, The IF Project, Fund Racial Justice and more. To date, they have raised over $2 million for grassroots

Music editor for Nashville.com. Jerry Holthouse is a content writer, songwriter and a graphic designer. He owns and runs Holthouse Creative, a full service creative agency. He is an avid outdoorsman and a lover of everything music. You can contact him at JerryHolthouse@Nashville.com
Previous LISTEN: Scotty McCreery’s “Why You Gotta Be Like That”
Next Todd Snider Announces “Return of the Storyteller” Tour