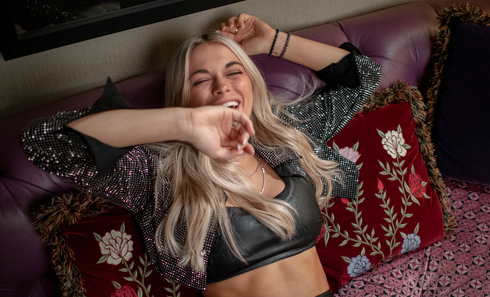 “I’m gonna be there,” said then 10-year-old Alana Springsteen on camera while staring at the Grand Ole Opry stage during a backstage tour with her family. Now, 12 years later, the music video for her first release, “You Don’t Deserve A Country Song,” via Columbia Records NY/Sony Music Nashville, features her destined Opry debut. Launching yesterday (1/23) as a CMT Broadcast Premiere – appearing on the Paramount Times Square Billboard in New York City, as well as across CMT, CMT Music and CMT.com – Watch the clip above.

Just announced among CMT’s Next Women of Country Class of 2023 during their 10-year anniversary, Springsteen shared with CMT.com, “I felt so inspired that day, watching Luke Bryan perform from side stage. I remember being so confident when I looked at the camera and said, ‘I’m gonna be there.’ Then getting to shoot the performance for this video the day of my Opry debut 12 years later… it all still gives me chills. I just want to make that little girl proud. There’s also a picture at the end of the video of little me sitting on the purple couch in the Porter Wagoner dressing room. You can see the stars in my eyes. That’s the exact same room and the same couch in the video. Truly one of the most epic full circle moments I’ve had so far.”

Directed by David Bradley and Springsteen, the music video opens with the home-movie footage before capturing key moments from her meteoric rise over the past few years, including captivating crowds with her high-energy live shows. Cut with a series of shots showing Springsteen in her natural element like kicking back on the beach and goofing around with her band, “you don’t deserve a country song” reaches its full circle climax as she takes the Opry stage at last – a turn of milestone events that transpired on her 22nd birthday on October 18, 2022, thanks to a firsthand invite from Country music superstar Luke Bryan.

“No one deserves to take your happiness,” Springsteen added with CMT.com. “Watching this video had me feeling incredibly nostalgic and grateful. I’ve been moving so fast the past few years, and it’s easy to put blinders on and forget what’s actually happening. Seeing all of these moments back-to-back like this helped put it all into perspective again and reinforced that I’m on the right path. It also made me realize how much my fans carried me through one of the hardest times in my life. Those moments do more to heal me than they’ll ever know.”

The song was written by Springsteen, Mitchell Tenpenny, Geoff Warburton, Will Weatherly, and Michael Whitworth. It was produced by Chris LaCorte and co-produced by Will Weatherly. With Springsteen credited as a co-producer on all but one on the project and co-writer on every track, Messing It Up releases March 24.

Quickly nearing 100 MILLION career streams to date, Springsteen just played the main beach stage at Luke Bryan’s Crash My Playa 2023 this past weekend (1/19) in Riviera Cancún, Mexico, in addition to popping up at Dustin Lynch’s Pool Party (1/21) to perform a couple songs with Lynch including a “Complicated” by Avril Lavigne cover.

Music editor for Nashville.com. Jerry Holthouse is a content writer, songwriter and a graphic designer. He owns and runs Holthouse Creative, a full service creative agency. He is an avid outdoorsman and a lover of everything music. You can contact him at JerryHolthouse@Nashville.com
Previous BMG Promotes JoJamie Hahr To Executive Vice President Recorded Music
Next Brad Paisley Joins UNITED24 To Help Rebuild Ukraine