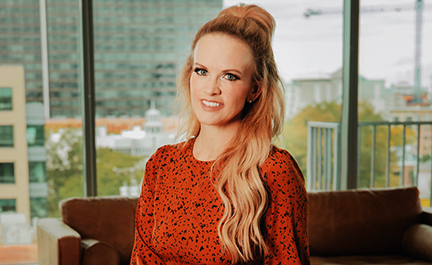 BMG announced today that JoJamie Hahr has been promoted to Executive Vice President Recorded Music – Nashville. In her new role, Hahr will oversee day-to-day operations of BMG Recorded Music in Nashville, including BBR Label Group and its roster and imprints Broken Bow Records, Stoney Creek Records, and Wheelhouse Records. She will continue reporting to President of BMG Nashville, Jon Loba.

“I’ve had the good fortune to work with JoJamie for a significant part of her professional life. Whenever she has been given a new opportunity for growth, she has not only met, but exceeded my high expectations,” said Loba. “She is one of the very best music executives in the industry and this promotion recognizes her many contributions, while at the same time giving her the opportunity to help further grow BMG Nashville, where I have no doubt, she will once again exceed our expectations.”

“It’s a privilege and a blessing to work with our extraordinary artists and our BMG family every day,” added Hahr. “Jon Loba has always encouraged my passion and my growth and I’m thankful for his belief in me. BMG truly puts artists and their music first, and I’m extremely proud of what we all continue to build together in Nashville and beyond.“

In 2020, JoJamie Hahr was elevated to SVP of BBR Music Group, overseeing all artist project strategy, brand partnerships, strategic marketing, as well as digital and creative efforts for each of the BBR Music Group’s three imprints (Broken Bow Records, Stoney Creek Records, Wheelhouse Records). Hahr has been with BBR Music Group for eight years, previously serving as VP of Promotion, and then VP of Marketing, taking the helm of the then newly created marketing department at BBR Music Group and growing the department into an industry leader before being promoted to SVP of the label group. Prior to joining the BBR team, Hahr served as the National Director of Field Promotion for The Valory Music Co., after being promoted from Dir. of SE Promotion and Marketing. Her 20 years in the industry include stops at UMG, WSIX and WWKA.

Under her tenure, superstar Jason Aldean has achieved ACM Entertainer of the Year three times, has been named the ACM Artist of the Decade, and recently tallied his 27th No. 1. In the past year, Broken Bow Records was named the Country Aircheck/Mediabase No. 1 airplay label for country music, Dustin Lynch notched his 8th #1, and the label saw a breakout year for Lainey Wilson with wins at the 2022 CMA Awards for Female Vocalist of the Year and New Artist of the Year. She also claimed ACM New Female Artist of the Year and ACM Song of the Year, as well as the iHeartRadio Award for Best New Country Artist and CMT’s 2022 Breakout Artist of the Year honor. Jelly Roll notched a No.1 at rock and country and has spent an outstanding 22 weeks atop the Billboard Emerging Artists chart.

Music editor for Nashville.com. Jerry Holthouse is a content writer, songwriter and a graphic designer. He owns and runs Holthouse Creative, a full service creative agency. He is an avid outdoorsman and a lover of everything music. You can contact him at JerryHolthouse@Nashville.com
Previous Nickel Creek Back After Nine Years
Next WATCH: Alana Springsteen’s “You Don’t Deserve A Country Song”