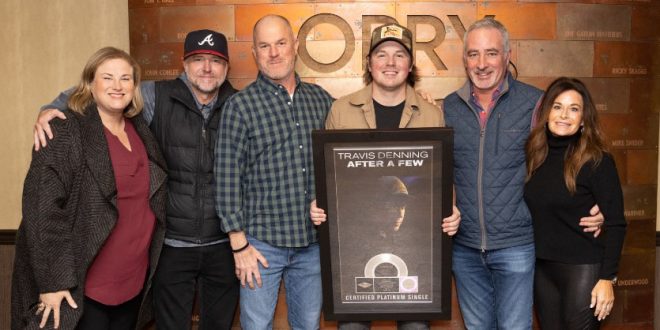 Mercury Nashville Recording artist Travis Denning just celebrated a new milestone, with the news that his first-ever No. One hit single “After A Few” has officially been certified PLATINUM by the RIAA, with over One Million units of the song being consumed since its release. Denning was surprised by his team at Universal Music Group, Red Light Management and the RIAA following his performance at Grand Ole Opry in Nashville, TN last night. Denning co-wrote “After A Few” with Kelly Archer and Justin Weaver.

“I’m blown away,” shared Denning. “This moment really only happens because of the team effort. My label, management, agent, radio, band and crew are all equally responsible for this milestone. Never would’ve dreamed I’d have a platinum song!”

A native of Warner Robins, Georgia, Denning has accelerated his ascend from a chart-topping single, releasing his debut EP BEER’S BETTER COLD that debuted in the Top 20 of Billboard’s Country Albums chart. Denning first made waves with the release of his Top 40 debut single “David Ashley Parker From Powder Springs.” Denning has previously toured with Dustin Lynch, Cole Swindell, Alan Jackson,, Riley Green, headlined his own “Heartbeat Of A Small Town Tour,” and is currently out on the road as direct support on Brothers Osborne’s “We’re Not For Everyone Tour.” With over 480 million streams worldwide, Denning has been spotlighted for CRS New Faces, an Opry NextStage recipient and a CMA KixStart Artist, as he makes his mark within the industry.

Music editor for Nashville.com. Jerry Holthouse is a content writer, songwriter and a graphic designer. He owns and runs Holthouse Creative, a full service creative agency. He is an avid outdoorsman and a lover of everything music. You can contact him at JerryHolthouse@Nashville.com
Previous WATCH: Joe Nichols Hit A “Home Run”
Next LISTEN: Molly Tuttle’s “She’ll Change”