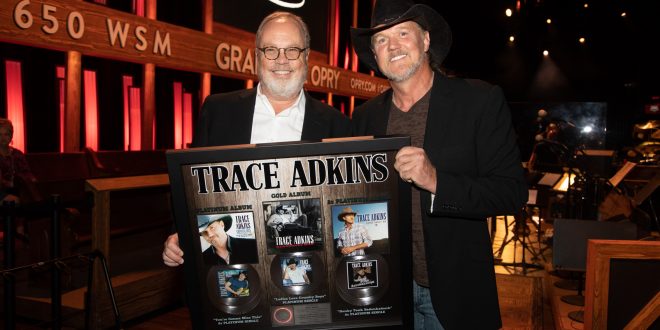 The show that made country music famous made for a number of life and career milestones tonight during two star-packed shows. Among the excitement on stage and backstage: Dustin Lynch was invited to become the newest member of the Opry family by Opry member Trace Adkins; Adkins celebrated his 15th Opry Anniversary; Opry member Eddie Montgomery introduced his nephew Dillon Carmichael for his Opry debut appearance, with Carmichael’s mom performing background vocals; and longtime Opry Entertainment Group President Steve Buchanan celebrated his retirement with remarks by Opry member Vince Gill along with friends, family and Opry members during a backstage reception.
After joining country group Exile on stage for a surprise performance of the group’s hit “Kiss You All Over,” Adkins returned to the stage for another surprise, inviting Lynch to become an official part of the Opry family. “Being a member of the Grand Ole Opry is at the top of my list of achievements in my career and always will be,” Adkins said. “We want people to be members of the Grand Ole Opry that will have a respect for this institution that it deserves, that it has earned for 92 years,” he added. “We think that Dustin Lynch is going to carry on in that proud tradition.”
Lynch, who made his Opry debut in 2012, replied to Adkins, “Thank you! I wish you weren’t so big. I want to pick you up, but I couldn’t!” Thanking his family and friends, Lynch concluded his portion of the show “with a frog in my throat and tears in my eyes,” singing his current single “Good Girl.”
Lynch will be officially inducted into the Opry family on Tuesday, Sept. 18.
Adkins closed each show watching a retrospective of some of his most unforgettable Opry moments and performing hits including “There’s A Girl In Texas,” “Ladies Love Country Boys,” and “You’re Gonna Miss This.” UMG’s Mike Dungan also surprised the Opry member on stage with double Platinum certifications for his singles “You’re Gonna Miss This,” “Honky Tonk Badonkadonk” and Platinum certification of “Ladies Love Country Boys.”
Earlier in the night, newcomer Dillon Carmichael was introduced for his official Opry debut by his Opry member uncle Eddie Montgomery of Montgomery Gentry. Carmichael– whose mother Becky joined him on background vocals– had once worked in the Opry’s security department, but had not allowed himself to step inside the Opry’s famed circle of wood center stage until tonight’s official debut.

Music editor for Nashville.com. Jerry Holthouse is a content writer, songwriter and a graphic designer. He owns and runs Holthouse Creative, a full service creative agency. He is an avid outdoorsman and a lover of everything music. You can contact him at JerryHolthouse@Nashville.com
Previous Brett Dennen Makes A Few Fans Night
Next Matthew Perryman Jones To Release “The Waking Hours” September 21