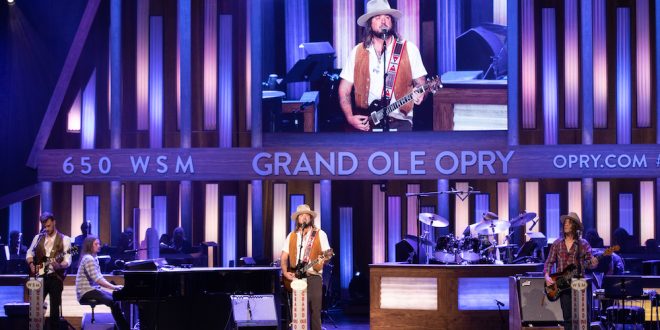 The Scooter Brown Band, made their Grand Ole Opry debut on Tuesday night. After a rousing welcome and endorsement from Opry star Charlie Daniels, the band played their signature title-track from their album American Son along with “Georgia” and “Ain’t Country At All.” They joined a star-filled line-up including Little Big Town, Dailey & Vincent, Cam, Bill Anderson, Zach Williams and the Charlie Daniels Band. Not only was one Country Music Hall of Fame and Grand Ole Opry member (Daniels) on hand to support, but long-time friend of the band Randy Travis also showed up and was greeted with a standing ovation by the sold-out crowd.

“Almost 20 years ago to the date of our debut at the Opry, I was standing on the yellow footprints starting Marine Corps Recruit Training in San Diego. I never imagined back then that I would perform inside the circle at the Grand Ole Opry. It was a life moment equal to getting my Eagle, Globe & Anchor paced in my hand and being called a Marine for the first time. To do it with two of musical idols, Randy Travis and Charlie Daniels, watching was something I will never forget. We are so grateful to the Opry family for this amazing opportunity and look forward to being back soon,” said Scooter Brown.

“There’s a young man that’s gonna come on after we get finished tonight, that is a hero in my book, he is a Marine. He has seen a lot of action… I just want you to know, he’s one of my favorite people so when he comes out here just remember, this guy went and fought for us,” said Charlie Daniels, during his set, about Scooter and the band.

Scooter Brown Band is currently in the middle of their “Story Of My Life Tour,” traveling across North America, playing shows in, Colorado, Texas, Alaska, Mississippi and more. In January 2019, lead singer and Marine Veteran Scooter Brown was awarded Male Vocalist of the Year at the 3rd Annual Rocky Mountain Country Music Awards presented by iHeartRadio. Scooter Brown Band’s “American Son” featuring Charlie Daniels was also nominated for Song of the Year. The award comes following his appearance on USA Network’s Real Country and the band’s release of their album American Son.

Music editor for Nashville.com. Jerry Holthouse is a content writer, songwriter and a graphic designer. He owns and runs Holthouse Creative, a full service creative agency. He is an avid outdoorsman and a lover of everything music. You can contact him at JerryHolthouse@Nashville.com
Previous Robert Earl Keen Announces Annual Christmas Show
Next LISTEN: Tanya Tucker Covers “The House That Built Me”