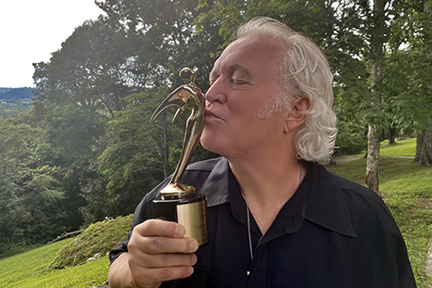 T. Graham Brown and Canadian country music singer/songwriter Jason Blaine along with The 2020 CCMA All-Star Band joined forces during the pandemic to create an unforgettable duet version of “Rainy Night In Georgia.” As part of Darren Walter’s ‘Stonehouse Sessions,’ these incredible musicians connected from their homes and studios to produce this special, high-quality collaboration. As a result of this timeless duet, the performers are now celebrating their win for ‘Online: Music Video’ with the 42nd Annual Telly Awards.

Watch “Rainy Night In Georgia,” above.

“Getting to record one of my favorite songs with the best musicians in Canada was a great experience,” shares Brown. “Thanks so much to Darren Walters for inviting me to be a part of such a cool thing and to win another Telly award for it is icing on the cake. Jason Blaine is a great artist and Tony Joe White, who wrote “Rainy Night In Georgia”, is surely smiling down on us! I hope we can do this again, very soon!”

“This collaboration with such a country legend like T. Graham Brown along with these fantastic musicians was a welcomed surprise during such a weird year for our industry. I’m honored to win my first Telly Award and I must thank Darren Walters for the call and such a great job on the production and for pulling it all together from our different corners of North America,” says Blaine.

Founded in 1979, The Telly Awards honor excellence in local, regional, and cable television commercials as well as non-broadcast video and television programming. With the recent evolution and rise of digital video (web series, VR, 360 and beyond), the Telly Awards today also reflects and celebrates this exciting new era of the moving image on and offline. The Telly Awards annually receive over 12,000 entries from all 50 states and 5 continents, showcasing the best work created within television and across video, for all screens.

Music editor for Nashville.com. Jerry Holthouse is a content writer, songwriter and a graphic designer. He owns and runs Holthouse Creative, a full service creative agency. He is an avid outdoorsman and a lover of everything music. You can contact him at JerryHolthouse@Nashville.com
Previous Todd Snider Announces “Return of the Storyteller” Tour
Next Americana Announces First Of 240 Performers