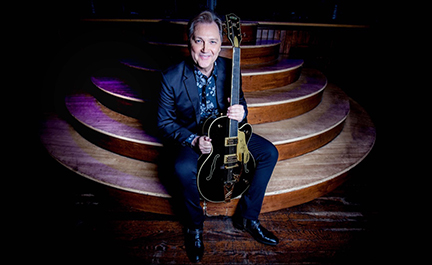 This Saturday, May 8 and Tuesday, May 11 singer/songwriter/instrumentalist Steve Wariner will celebrate his 25th anniversary as a Grand Ole Opry member. Wariner’s lifelong dream came true when he was inducted May 11, 1996 and performed “A Woman Loves,” as well as a duet with Bill Anderson of “Tips Of My Fingers” and then joined Chet Atkins on “Have I Told You Lately That I Love You?”

“Seems like only yesterday I was with my family being inducted as the newest member of the world-famous Grand Ole Opry! Still humbled and honored to be part of this great family for 25 years! Let’s celebrate!” shared Wariner.

Wariner’s path to the hallowed circle began when he started playing guitar professionally as Dottie West’s bass player when the Opry was being held at the Ryman Auditorium. One night while performing in an Indianapolis club, Country Music Hall of Fame member, Dottie West, happened to be there and spotted the talented teenager. West convinced the 17-year-old to make the bold move from Indiana to Music City to join her band. Upon accepting the offer, Wariner played bass for three years with her and eventually signed to Dottie’s publishing company as a songwriter. After he left Dottie’s organization, Wariner toured and recorded with Grand Ole Opry star Bob Luman. In the 70’s, Wariner’s life and career forever changed when he connected with his idol and guitar extraordinaire Chet Atkins through guitar virtuoso Paul Yandell. Atkins signed him to his first recording contract at RCA Records in 1977 and eventually hired Wariner to play bass in his band.

Music editor for Nashville.com. Jerry Holthouse is a content writer, songwriter and a graphic designer. He owns and runs Holthouse Creative, a full service creative agency. He is an avid outdoorsman and a lover of everything music. You can contact him at JerryHolthouse@Nashville.com
Previous Robert Finley’s “Sharecropper’s Son” Out May 21
Next Travis Denning Launches Weekly Variety Series