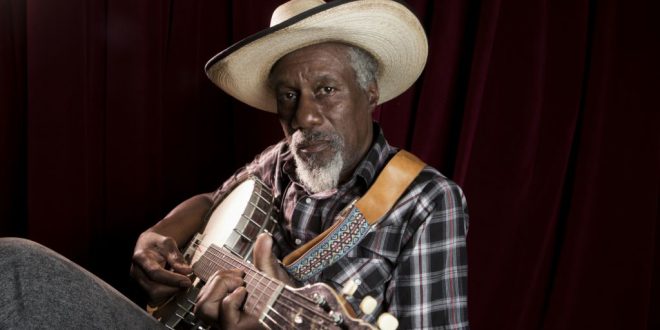 Robert Finley’s “Sharecropper’s Son” Out May 21

Robert Finley’s forthcoming Dan Auerbach produced album, Sharecropper’s Son, features blues veterans and studio legends who have worked with everyone from Elvis to Wilson Pickett – it is a soulful masterpiece, rooted in the classic sounds of southern soul, country, rhythm and blues. Finley’s formidable vocals take centre stage and reflect on his life and childhood where he worked in the cotton fields alongside his family, as Sharecroppers during the Jim Crow era South. Sharecropper’s Son, will be released on May 21

Robert is a 67 year old legally blind veteran who after the Vietnam war gave up on music to take care of his family and became a skilled carpenter. He lost his sight in his 60s (and also overcame divorce, house fires and an automobile accident) to finally pursue his musical dream and became an overnight soul sensation after 67 years of hard work. His breakthrough came when a video of him busking caught the attention of Dan Auerbach (who proclaimed him “the greatest living soul singer” and produced his critically acclaimed Goin’ Platinum). Since then, Robert’s toured the world and even appeared on America’s Got Talent making it to the semi finals! Now is his chance to share his inspiring story and belief that you are never too young to dream and never too old to live.

Born in 1954, one of eight children, Finley helped his family, who were Sharecroppers, pick cotton throughout his childhood, during the Jim Crow era south. “It was an interesting childhood” shares Finley, “but there wasn’t much fun. The work was hard, but it wasn’t the work that bothered us. Getting paid was the problem.” His father Joe Finley was a deeply religious man and banned playing any blues music in the home. Finley’s early musical exposure was mainly singing gospel music in church and in a family gospel quartet. Later he discovered “the devil’s music” and became a fan of Elvis Presley, Jimi Hendrix, Chuck Berry, Ray Charles, James Brown, Bobby Womack and Joe Simon.

When he was 7 years old the family moved to Winnsboro, LA, and he attended a segregated school but dropped out in the 10th grade to get a job. “We stayed in the neighbourhood most of our childhood. Sometimes a group of us would walk out together,” Finley recalled. “It wasn’t really all that safe to be by yourself because you still had people doing all sorts of crazy crap. The army was the first place I was around white people and people of different nationalities.” Following his military service, Finley became a skilled carpenter. This all changed when he began losing his sight. Finley is legally blind and has no sight in one eye and tunnel vision in the other. His brother suffers from the same condition.

He believes the sight in his good eye was improved by the power of prayer, and Finley’s faith has also helped him focus on launching his music career in his 60’s. According to Finley, “losing my sight gave me the perspective to see my true destiny.” His delayed ascent has been swift. He was discovered in 2015 busking on the streets of Helena, Arkansas. In addition to touring more than 10 countries in the wake of his two earlier albums, Finley was also a contestant on the 2019 season of the TV competition America’s Got Talent reaching the semi-finals and quickly became a fan favorite during his run. His daughter Christy Johnson, who appeared with Finley on the show, also provides some backing vocals for Sharecropper’s Son.

Reflecting on his new album, Finley says, “I want people to understand that I can’t be kept in a box. I like to do all kinds of music—everything that means anything to me, from gospel to blues to soul to country to rock ‘n’ roll. And I like to stand out and be different, and do things that reach young and older people. What I want everybody to know from my own experience is that you’re never too young to dream, and that you’re never too old for your dream to come true.”

Music editor for Nashville.com. Jerry Holthouse is a content writer, songwriter and a graphic designer. He owns and runs Holthouse Creative, a full service creative agency. He is an avid outdoorsman and a lover of everything music. You can contact him at JerryHolthouse@Nashville.com
Previous WATCH: John Hiatt With The Jerry Douglas, “I’m In Asheville”
Next Steve Wariner To Celebrate 25 Years As Opry member