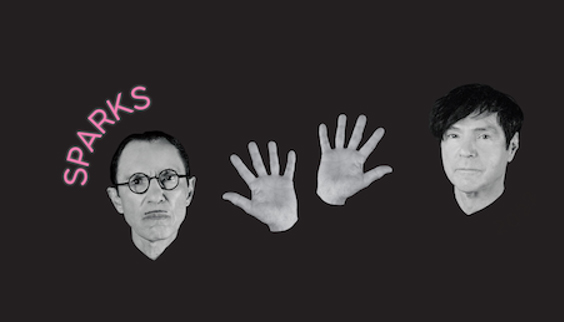 Sparks are celebrating their award-winning post-millennial renaissance with a world tour, including the biggest North American run of their career. North American dates officially get underway Friday, March 11 with a stop at the Ryman Auditorium on March 22 right here in Nashville. GET TICKETS HERE.

Brothers Ron and Russell Mael grew up in Pacific Palisades, in west Los Angeles County, California, during the “Golden Age” of the LA club scene, when the Doors, the Standells, and Love played the Whisky a Go Go on Sunset Strip and the Beach Boys played in the late afternoon at Teen-Age Fair at Pickwick Recreation Center in Burbank, California.

Both Ron and Russell Mael are seen in the audience during the Ronettes’ section of the concert film The Big T.N.T. Show, filmed in 1966. Both attended UCLA, Ron studying cinema and graphic art and Russell, theatre arts and filmmaking. Detesting the folk music scene, which they considered “cerebral and sedate and we had no time for that”, they developed a particular taste in English bands of the time such as the Who, Syd Barrett’s Pink Floyd, the Kinks and the Move, which led to their description of themselves as “Anglophiles”.

Music editor for Nashville.com. Jerry Holthouse is a content writer, songwriter and a graphic designer. He owns and runs Holthouse Creative, a full service creative agency. He is an avid outdoorsman and a lover of everything music. You can contact him at JerryHolthouse@Nashville.com
Previous Kelsea Ballerini And Anthony Mackie To Host CMT Music Awards
Next Willie Nelson Loses Beloved Sister And Bandmate