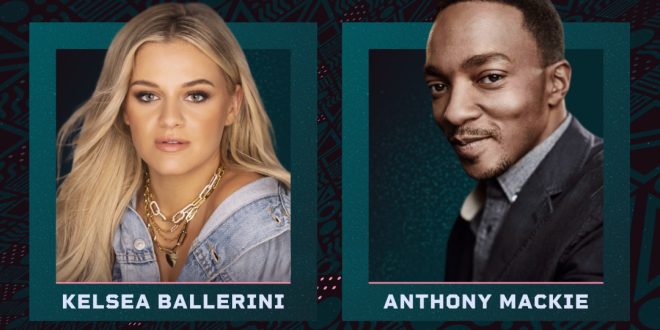 CMT today announced that Kelsea Ballerini and actor Anthony Mackie will take the stage together as co-hosts of the 2022 CMT MUSIC AWARDS broadcasting LIVE from Nashville on Monday, April 11th (8:00-11:00 PM LIVE ET/delayed PT). This will be the inaugural broadcast of the CMT MUSIC AWARDS on the CBS Television Network.

This marks Mackie’s first time as host, after he presented the “Video of the Year” award last year, and Ballerini’s second consecutive year hosting. Nominations for the 2022 CMT MUSIC AWARDS will be announced on Wednesday, March 16, in tandem with the start of fan voting. Additional details on Nominations, Performers and Presenters to be announced in the coming weeks.

“We couldn’t pass up the opportunity to pair one of the biggest names in country music with one of the world’s most electrifying superheroes to host our biggest CMT MUSIC AWARDS ever,” shared Margaret Comeaux, John Hamlin and Leslie Fram, Executive Producers, CMT MUSIC AWARDS. “Kelsea and Anthony are each wildly successful in their own right and combined, bring mega star power that transcends the worlds of music, film and pop culture with a supersized fan base. We know this dynamic duo is the perfect pairing to bring our show to the next level as we reach our largest global audience ever LIVE on CBS.”

Said Ballerini: “I’m thrilled to be returning as host at this year’s CMT Awards with Anthony Mackie! This award show is always a special one, as it revolves around the fans and celebrates their favorite artists. This year is especially cool to be a part of as CMT grows into a network spot and expands for even more fans to get involved. It’s going to be a big one and I can’t wait!”
Said Mackie: “I had the pleasure of presenting at last year’s CMT Music Awards and received the warmest welcome from the country music community and the city of Nashville. I can’t wait to get back to Music City to co-host this year’s awards with the amazing Kelsea Ballerini.”

Music editor for Nashville.com. Jerry Holthouse is a content writer, songwriter and a graphic designer. He owns and runs Holthouse Creative, a full service creative agency. He is an avid outdoorsman and a lover of everything music. You can contact him at JerryHolthouse@Nashville.com
Previous LISTEN: Jimmie Allen’s “Down Home”
Next Sparks Announces World Tour