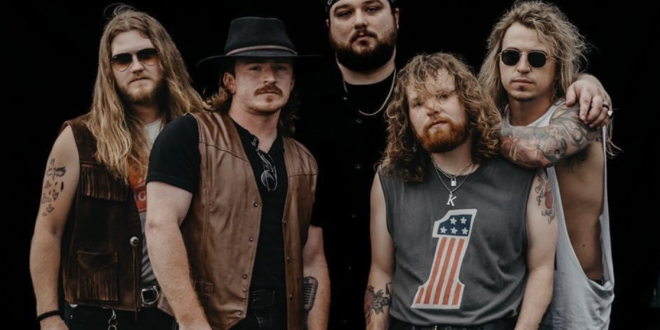 “Part-Time Playboy” gives the audience the perfect energy with electrifying instrumentation and contagious melodies. Revelry brings confidence and swagger to the table like no other, beckoning back to some of the greatest sounds that ever emerged from rock music from the ’70s forward. The band will be making their Ryman Debut on November 17th, 2022, sharing the bill with Yelawolf (introducing new project with Shooter Jennings Sometimes Y), Bones Owens, and Tony Martinez. Revelry has also made several appearances on the highly acclaimed Whiskey Jam stage.
Revelry’s new smash hit, “Part-Time Playboy” is a fusion of modern rock and roll, rooted in the classics. The song narrates the life of a working man, who, every once in a while, takes a break from his usual mundane life to let loose. Revelry includes the members, Zack Montgomery, Andrew “Redd Byrdd” Howell, J Whorley, Dane Lovvorn, and Cruze Blanke.

Revelry’s music is inspired by the classic rock of the ’70s, and influenced by their country roots. The themes of hard work leading up to a much-needed break are characteristic of the country genre. Lead vocalist Montgomery sings, “He’s running on his last leg, tryna get a paycheck/Breaking his damn back, tryna catch a damn break/He ain’t got no money, but the lights are still on/Went to work this morning, now he’s front row at the show.” The influence of country music is no surprise, since the band members also take great inspiration from artists such as Waylon Jennings and Lynyrd Skynyrd.

The catchy melody enchants the audience, sending them to the wild weekend that the playboy is experiencing. The major guitar riffs and solos by the members, Andrew “Redd Byrdd” Howell, and J Whorley voraciously set “Part-Time Playboy” apart from usual modern rock.

Music editor for Nashville.com. Jerry Holthouse is a content writer, songwriter and a graphic designer. He owns and runs Holthouse Creative, a full service creative agency. He is an avid outdoorsman and a lover of everything music. You can contact him at JerryHolthouse@Nashville.com
Previous Dax Exposes Mental Health Realities In New Song, “Depression”
Next Svdden Death & The Caverns Give Back To Recovery Soldiers Ministries