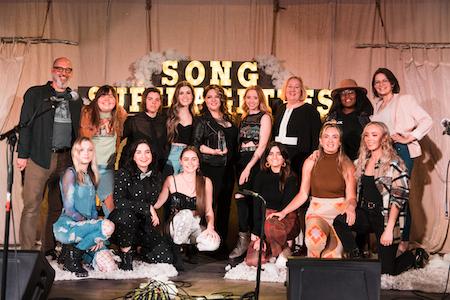 The night kicked off with a writers’ round hosted by original Song Suffragette and TMWRK Records recording artist Kalie Shorr performing with Madeline Finn, Livy Jeanne, Mia Morris and first-time Song Suffragette Brittney Spencer. The first round’s special guest was 19th & Grand Records’ Tenille Arts who has been part of the Song Suffragettes collective since 2016 and currently has a Top 10 country radio single with “Somebody Like That.”

After the first round, Song Suffragettes’ Founder Todd Cassetty took the stage along with Event Director Taylor Fair to welcome everyone and to note the successes of Song Suffragettes over the past seven years. Said Cassetty, “It has been my profound honor to be surrounded by so much talent in the past 7 years, and it gives me great pride to know that we have played a part in the lives and careers of over 300 singer-songwriters – 21 who have gone on to receive recording contracts and 49 who have landed publishing deals. Most of all, I am most proud of the sense of community we’ve engendered among female creatives that I hope will continue to affect today’s generation of talented women as well as the next.”

Cassetty then announced that The LSS Group, an all-female, entertainment-industry-focused wealth management team led by Eden Lopez, Leslie Schwartz and Paula Steinberg would continue its year-long Presenting Sponsorship of Song Suffragettes. The LSS Group is part of RBC Wealth Management and splits its time between New York, Nashville, LA and other major entertainment cities throughout the U.S. This special announcement was capped off by a statement from The LSS Group read by Cassetty’s 9-year-old daughter, Kate.

Next, esteemed music journalist and All Access Nashville Senior Editor Phyllis Stark was welcomed to the stage where Stark in turn introduced CMA, ACM winner and current four-time nominee Ashley McBryde. After a 30-minute live interview that covered everything from her songwriting process to superstitions, Warner Music Nashville’s McBryde took the stage alone and performed “Girl Goin’ Nowhere”, an unreleased song, “Whiskey and Country Music,” and her recent Top 10 RIAA Gold-Certified single “One Night Standards” to the delight of the audience.

Cassetty and Fair then returned to the stage to present McBryde with the “Song Suffragettes Yellow Rose of Inspiration Award,” an honor bestowed on a female songwriter who has inspired the many Song Suffragette women who one day hope to follow in McBryde’s successful footsteps. “I’ve said just about everything funny and sentimental I can say,” said McBryde. “You must be present to win, ladies. And the gal that quits last, won…”

Music editor for Nashville.com. Jerry Holthouse is a content writer, songwriter and a graphic designer. He owns and runs Holthouse Creative, a full service creative agency. He is an avid outdoorsman and a lover of everything music. You can contact him at JerryHolthouse@Nashville.com
Previous Crime Fighter/Hitmaker Jeff Carson Is Back On The Charts
Next WATCH: Randy Rogers And Wade Bowen’s Hilarious New Video