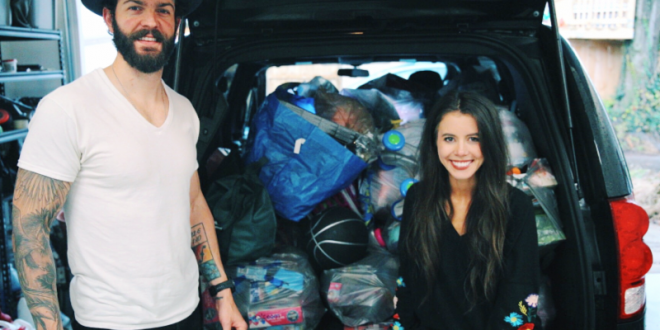 Singer, songwriter Ryan Kinder helped raise over $5,000 through his charity, Kinder’s Kids, this past holiday season helping provide toys to children affected by natural disasters. Since launching the nonprofit in 2014, Kinder’s Kids has continued to grow, with 2018 marking its best year to date, with donations from the NFL Alumni Association, NFL Cheerleader Alumni Association, CycleBar Franklin and Shop These Three Boutique. Fans, friends and family also contributed, and various toys were gathered throughout the year as a result of Kinder’s tour rider.

On December 15, 2018, more than 400 toys for 200 children were delivered to Kingdom Impact Center, an after-school facility in Panama City, Florida that provides outreach and a safe space for neighborhood kids. Watch special behind the scenes video clips HERE.

“Every trip we’ve had the opportunity to take toys to a community in need has impacted us in a life-changing way, but this one hit deeper,” says Kinder. “Seeing a city that I grew up visiting as a kid and playing gigs — hurting the way PCB and Mexico Beach was hurting — left me rattled, uneasy and upset. But, the way the Kingdom Impact Center is lifting the community up, creating a lasting change and helping everyone get back on their feet was so awe inspiring. We were lucky to find this wonderful group of people to team up with to give back this Christmas.”

Kinder, whose songs have been streamed worldwide more than 50 million times, launched Kinder’s Kids in 2014 with his wife, Heather, soon after they were married. The idea for their charitable organization sparked as they reflected back on the devastating tornado that tore through Tuscaloosa, AL in 2011 while both were attending the University of Alabama. Those images of seeing so many families’ homes destroyed led them to launching the nonprofit aiming to provide , through music and the arts, a toys for as many children as possible affected by natural disasters.

In previous years, Kinder’s Kids has donated toys to organizations including Towing for Tots in Murray, KY (2014), Vanderbilt’s Children’s Hospital in Nashville, TN (2015), various cities in the North Carolina area (2016) and Faith Family Church in Baytown, TX (2017). While toy drives are the primary focus for Kinder’s Kids presently, plans are in the works to expand their initiatives to funding fine arts in less fortunate schools. For more information or to make a donation, visit KindersKidsFoundation.com or follow on Instagram.

Music editor for Nashville.com. Jerry Holthouse is a content writer, songwriter and a graphic designer. He owns and runs Holthouse Creative, a full service creative agency. He is an avid outdoorsman and a lover of everything music. You can contact him at JerryHolthouse@Nashville.com
Previous The Who Is Coming Back To Nashville!
Next Patty Griffin Announces Headlining Tour