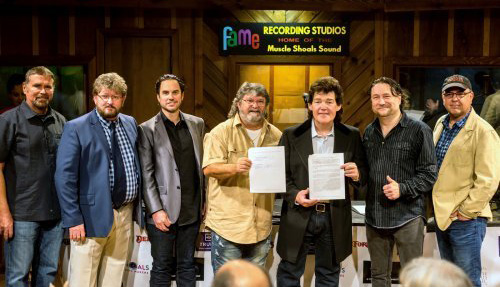 Shenandoah have inked a worldwide recording agreement with newly-formed 8 Track Entertainment, which will be distributed by Warner Music Group’s ADA (Alternative Distribution Alliance). New music is expected soon from the band that has tallied more than 300 million streams, over 8 million combined album sales, and 13 No. 1 radio singles over the course of more than three decades.

“The most incredible things continue to happen in the life of Shenandoah,” explains the band’s frontman Marty Raybon. “A very large piece of our moving forward is the signing with 8 Track Entertainment. This in so many ways will enlarge the music reach, even the brand Shenandoah. We are looking forward to the partnership and the work we have before us. 90’s country music is still alive, and we are going to make more of it, just all grown up now.”

“I am absolutely delighted to sign Shenandoah to 8 Track Entertainment as Muscle Shoals is where it all began for this group at the outset of their career,” says 8 Track president Noah Gordon. “They will return to FAME to record their next project, scheduled for release in the coming months.”

Music editor for Nashville.com. Jerry Holthouse is a content writer, songwriter and a graphic designer. He owns and runs Holthouse Creative, a full service creative agency. He is an avid outdoorsman and a lover of everything music. You can contact him at JerryHolthouse@Nashville.com
Previous CMA Fest 2022 Announces Initial Lineup
Next Americanafest Announces First Round Of 2022 Performers