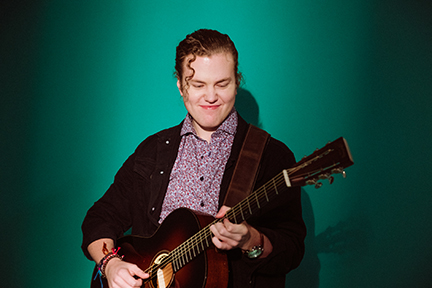 Berklee College of Music graduate Sam Robbins is a past audience winner of the “Nashville Rising Song” event, a songwriting competition held twice a year featuring up and coming Nashville artists. He was also the first artist to perform a Jim Croce song during his audition for Adam Levine, Kelly Clarkson, Blake Shelton, and Jennifer Hudson on NBC’s The Voice in 2018, a fact that still feels artistically fitting to Robbins.

Now over the course of two years, Finally Feeling Young, the freshman album from Nashville based Robbins chronicles the artist’s journey from adolescence into adulthood in real time. The album was recorded at Red Shed Sound in Boston and Nashville with producer and engineer Alex Fansel. “I’ve always loved classic singer-songwriters from the 70’s, and my writing has always reflected that. On Finally Feeling Young we tried to recreate that vintage sound along with modern production elements added here and there that would create a unique sound” said Robbins. “Looking back, I can hear what I was going through in the songs, and how much I was changing in the recordings. I’m so grateful to have a little time capsule from this chapter of immense growth. It almost feels like a concept album, but it came about naturally as it was happening.”

Inspired by a natural interest in music at a young age, Robbins’ connection to the medium was strengthened over the course of summer road trips with a singular box set of 1970’s songwriter hits belonging to his father. Since those humble beginnings he has gone on to tour full time, performing at venues such as The Bluebird Cafe, Blue Ocean Music Hall and Tupelo Music Hall. Following the release of his single “Addicted” in early 2019, Sam headlined a sold-out show at the 200 seat 3S Artspace in his hometown of Portsmouth, New Hampshire.

“This is my first album, and I think it’s special in that way. There’s a feeling of discovery in it. You can hear my voice, and my perspective, change throughout the recording. My artistry is something that I think listeners want but are missing today.” Finally Feeling Young is set for release May 14th on all major outlets.

Music editor for Nashville.com. Jerry Holthouse is a content writer, songwriter and a graphic designer. He owns and runs Holthouse Creative, a full service creative agency. He is an avid outdoorsman and a lover of everything music. You can contact him at JerryHolthouse@Nashville.com
Previous Chris Lane Releases “That’s What Mamas Are For” For Mother’s Day
Next Dan + Shay Getting Back On The Road