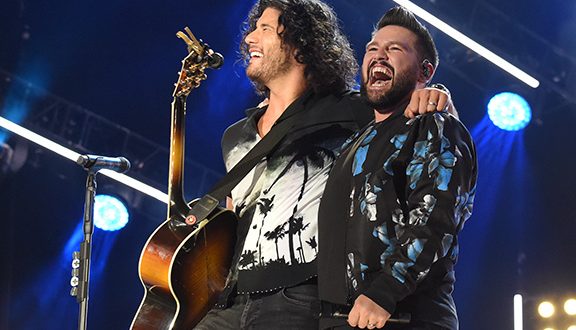 Dan + Shay Getting Back On The Road

Dan + Shay are gearing up to get back on the road with their headline Dan + Shay The (Arena) Tour kicking off with new 2021 dates beginning September 9. The tour was just getting started when Covid reared its ugly head. The massive tour, marked a career milestone for the duo as their first ever headlining arena trek when it officially kicked off in March 2020 with three consecutive sold-out shows – two back-to-back in Nashville, TN and another in Columbus, OH. More than 40,000 tickets were sold across the three nights.

Alternative pop rockers The Band CAMINO and 3x GRAMMY nominee and multi-platinum-selling singer-songwriter Ingrid Andress will join The (Arena) Tour as special guests for all dates.

Dan + Shay have continued their meteoric rise to superstar status throughout 2020 and 2021. In March, they won their third consecutive GRAMMY Award for Best Country Duo/Group Performance, making them the first artist to do so since the category’s inception. They also recently pulled off a three-peat at the 56th annual ACM Awards in April, taking home their third straight Duo of the Year title and performing their new hit single “Glad You Exist” from Nashville’s esteemed Bluebird Café. They are currently nominated for an iHeart Radio Music Award in the all-genre Best Duo/Group of the Year category and are Billboard Music Awards finalists for Top Duo/Group and Top Country Duo/Group. The duo has performed on countless television stages and recently teamed up with Blake Shelton on the current milestone 20th season of NBC’s The Voice, where they served as Shelton’s Battle Advisors.

Music editor for Nashville.com. Jerry Holthouse is a content writer, songwriter and a graphic designer. He owns and runs Holthouse Creative, a full service creative agency. He is an avid outdoorsman and a lover of everything music. You can contact him at JerryHolthouse@Nashville.com
Previous Sam Robbins Set To Release “Finally Feeling Young”
Next Kimberly Kelly Signs With Show Dog Nashville