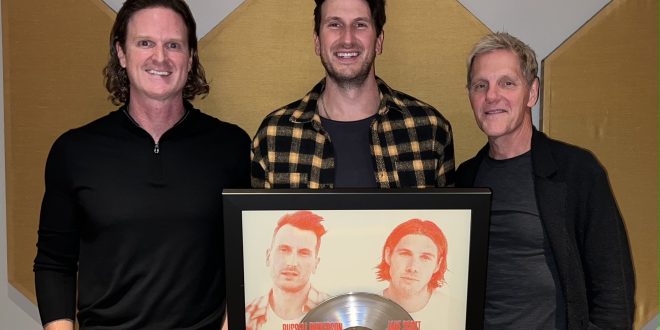 Triple Tigers artist Russell Dickerson has added a fifth PLATINUM single to his growing collection with “She Likes It,” featuring Jake Scott. Dickerson co-wrote the track along with Scott and Josh Kerr. This new RIAA-certification comes on the heels of Dickerson’s previous chart success including “Yours” (3x Platinum), “Blue Tacoma” (2x Platinum), “Every Little Thing” (Platinum), and “Love You Like I Used To” (Platinum).

With just a week left before the release of his third studio album, another song is available today titled, “Blame It On Being Young.” Produced by Josh Kerr and Dickerson, the pair wrote the song alongside Parker Welling. The mid-tempo, introspective track invites listeners to take a trip down memory lane, capturing forever-young fun like a country pop Polaroid. Dickerson also released a video to accompany the track which can be viewed above.

“‘Blame It On Being Young’ is all about the dumb things I did with my friends as a kid,” Dickerson stated. “When we were writing the song, it was fun to think about those crazy memories. I think the song really sums up that feeling of being young and on top of the world that we all experienced growing up.”

Music editor for Nashville.com. Jerry Holthouse is a content writer, songwriter and a graphic designer. He owns and runs Holthouse Creative, a full service creative agency. He is an avid outdoorsman and a lover of everything music. You can contact him at JerryHolthouse@Nashville.com
Previous Jerry Lee Lewis Dead At 87
Next LISTEN: Paris Jackson’s “Just You”