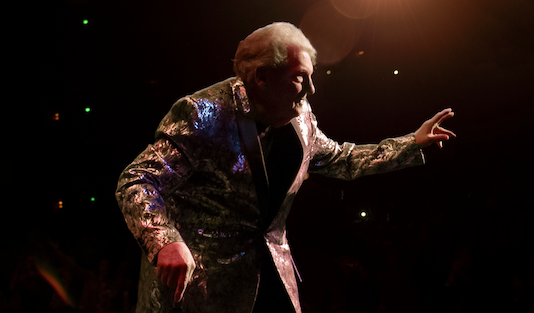 Jerry Lee Lewis passed away today at the age of 87 at his home in Desoto County, MS, south of Memphis. He was born in 1935 to Mamie and Elmo Lewis of Ferriday, Louisiana. In November of ‘56 Jerry Lee made his way to Memphis, Tennessee where he would join Sun Records and launch hit records with “Crazy Arms,” “Whole Lotta Shakin,’”, and “Great Balls of Fire.” Jerry Lee, along with with his friends Johnny Cash, Elvis Presley and Carl Perkins would become known as the Million Dollar Quartet and there is not any part of music that their influences haven’t touched. As a member of the Rock and Roll Hall of Fame’s very first class of inductees, “The Killer” holds numerous awards including a star on the Hollywood Walk of Fame, numerous GRAMMYs, the Recording Academy’s Lifetime Achievement Award and countless other honors. He is truly one of rock’s first great wildman.

Services and more information will be announced in the following days. In lieu of flowers, the Lewis family requests donations be made in Jerry Lee Lewis’ honor to the Arthritis Foundation or MusiCares – the non-profit foundation of the GRAMMYs / National Academy of Recording Arts and Sciences. Check back for updates.

Here are some celebrity thought about Lee’s passing:

“It’s so sad to hear that Jerry Lee Lewis has passed. I’ve loved him since I first met and worked with him in the early 1970s. He was definitely one of a kind as an artist and person.”
–Crystal Gayle

“Jerry Lee was a Christian, an American icon and the greatest piano player in the world. People will be listening to ‘Great Balls of Fire’ and ‘Whole Lot of Shakin” 500 years from now. I will miss him. God bless you Jerry Lee.”
-Dennis Quaid

“I first met Jerry Lee Lewis with my brother Lefty in the late 50’s on a TV set they were filming and got to hear him sing “Great Balls Of Fire”… then years later when I was recording in California in the early ’80s (on a night off) we went to The Palamino Club to see Jerry’s show (that is the night me and my wife Jo met) and got to visit with him briefly. Over the next few years, we got to do a lot of shows together. We were so proud he was just inducted into the Country Music Hall of Fame.
‘Say Hello to Heaven’ Jerry Lee ❤️”
–David Frizzell

“Jerry Lee at the beginning of a session put his gun on the piano.
Silence.
They do the session…
The next day the musicians come to the session and all bring their guns.
That was Jerry Lee.”
–Don McLean

“The image and influence of Jerry Lee Lewis is an iconic memory we will always have. As a musician/singer I loved his energy and style. He was the greatest!”
–Janie Fricke

“I went to the Jerry Lee Lewis school of singing. His style was one of my biggest influences. What can I say that hasn’t already been said? I’ll really miss that man. He was a pounder supreme and sublime. As he used to say, “Think about it!” Condolences to his survivors. RIP Daddy-O!!”
–T. Graham Brown

“Jerry Lee was very much like Rod Stewart is – when he stepped on that stage to perform, he OWNED it! He will be missed.”
–Lacy J. Dalton

Music editor for Nashville.com. Jerry Holthouse is a content writer, songwriter and a graphic designer. He owns and runs Holthouse Creative, a full service creative agency. He is an avid outdoorsman and a lover of everything music. You can contact him at JerryHolthouse@Nashville.com
Previous Ashley Cooke Makes Her Opry Debut
Next Russell Dickerson Goes Platinum