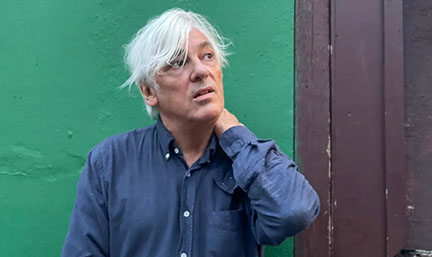 Robyn Hitchcock has shared an animated video for his new song, “The Raging Muse” (watch above.) The classic Hitchcockian hard-driving and melodic rocker is the latest single from his upcoming new album, SHUFFLEMANIA!

“Songs come to me alive and flickering, fresh from the lake of my subconscious. I’m a compulsive writer,” says Hitchcock. “‘The Raging Muse’ was written in Nashville in 2020. It began life as a sketchy home recording, just me and my old Telecaster – the same guitar I played on ELEMENT OF LIGHT back in 1986 – this time around faithfully engineered by Tubby and Ringo. Once I had the bones of the song, I sent it to my friend Davey Lane in Melbourne, who fleshed it out with spiky lead guitar, and then onto Charlie Francis in Cardiff, who added the melodramatic piano and bagpipes. The fish in the grass in this song are one of my many recurring dreams, I’m sure they’ll appear again soon.”

The veteran British artist’s first full-length collection in over five years, SHUFFLEMANIA! was heralded recently by the mischievous first single, “The Shuffle Man,” with instrumental and vocal accompaniment from musician/producer/artist Brendan Benson. Watch the video.

“The Shuffle Man is the imp of change,” says Hitchcock, “the agent of fortune. He throws the cards up in the air and leaves you to deal with where they fall. He is the exhilaration of chaos – with fast hands and a stovepipe hat.”

The perpetually traveling Hitchcock will herald SHUFFLEMANIA! with a wide-ranging international live schedule including a date at The Basement on November 16 here in Nashville.

Recorded in locations around the world over the pandemic era, SHUFFLEMANIA! offers up 10 new Robyn Hitchcock songs in just under 40 minutes – a “proper pop album” as nature intended.

Having long kept up a prodigious work rate for much of his shapeshifting six-decades-and-counting career, Hitchcock found himself burned out following the completion of 2017’s acclaimed ROBYN HITCHCOCK. A 2019 Christmas visit to the ancient palace of Quetzalcoatl in Tulum, Mexico brought forth from his guitar a long overdue new song, “Feathery Serpent God,” lyrically entire and musically intact, albeit in demo form. More new songs materialized as Hitchcock flew home to his adopted Nashville. His notebook began to fill with new lyrics, some accompanied by music, others reaching completion over the coming months.

With the muse upon him, and the pandemic descending, Hitchcock bought a 5-track recording device – not dissimilar to the 4-track cassette machine on which he wrote and arranged his landmark I OFTEN DREAM OF TRAINS more than three decades earlier. He emailed his freshly recorded guitar-and-vocal songs to a star-studded selection of his (many) musician friends around the world, all of whom were also marooned at home with time to spare and much more sophisticated recording equipment than he himself was using, among them Brendan Benson, Johnny Marr, Sean Ono Lennon, Kimberley Rew, Morris Windsor, Kelley Stoltz, Anne Lise Frøkedal, Davey Lane (You Am I), Eric Slick (Dr. Dog), and Pat Sansone (Wilco, The Autumn Defense), all of whom proved more than happy to contribute.

As things opened up somewhat in the second half of 2020, Hitchcock and his partner Emma Swift returned to London, booking a final session at Abbey Road where they re-recorded most of his vocals, with Swift – a singer with an ear “far more acute than mine” – acting as producer. Stems for the whole project were then sent to longtime friend, producer/engineer Charlie Francis (R.E.M., The High Llamas, Martin Carr), who mixed the album in his Cardiff attic, where the seagulls swoop and dive.

“To me, most songs are about themselves and how they make you feel,” says Hitchcock. “What triggers them is mysterious. The songs on this record are a series of sub-personalities, fertilized by chance. You might even say they were cards, dealt to me by The Shuffle Man. Listening back now, to me SHUFFLEMANIA! is a party record, direct from my unconscious to you. Even if you’re a party of one – have fun with it!”

Music editor for Nashville.com. Jerry Holthouse is a content writer, songwriter and a graphic designer. He owns and runs Holthouse Creative, a full service creative agency. He is an avid outdoorsman and a lover of everything music. You can contact him at JerryHolthouse@Nashville.com
Previous Live On The Green Starts Tonight!
Next Folds of Honor Tennessee Raises Over $324,000