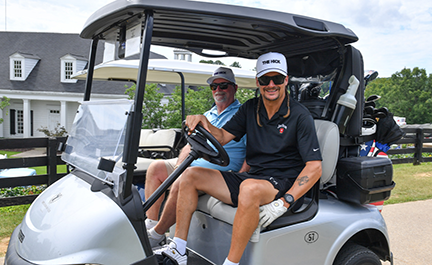 Folds of Honor Tennessee raised over $324,000 this week at the 2nd annual Celebrity Golf Tournament. The event featured celebrity players Lee Brice, Jelly Roll, Michael Ray, Rex Ryan, Kid Rock, and Cortland Finnegan amongst many others. The tournament brought together friends from sports, entertainment, and corporate America for a day of fun at the prestigious Governors Club. Foursomes teed off in support of Folds of Honor’s mission to provide opportunity to the families of our nation’s injured and fallen veterans in the form of scholarships.

“What a blessing! The energy in the air was electric on Monday. Thank you to all the sponsors, board members, celebrities, players, and volunteers who helped the Tennessee Chapter of Folds of Honor raise nearly 65 scholarships for our military families. Our “squadron” is unmatched!” states Jenner Kreifels, the Regional Development Officer for Folds of Honor Tennessee.

The day’s winner was Team IB3 Global Solutions headed by executive board member, Sean Gleason out of Knoxville. The event also featured a post-golf dinner, a concert by Edwin McCain, and a live/silent auction. The guest speaker was Rachel Faulkner-Brown, founder of “Be Still Ministries”.

In addition, Folds of Honor announced this week the distribution of nearly 9,000 academic scholarships worth approximately $40 million for 2022-23. Since its inception in 2007, Folds has awarded nearly 44,000 scholarships valued at nearly $200 million.

“From where we started, to where we are today is something I never could have imagined,” said Lt Col Dan Rooney, founder and CEO of Folds of Honor. “This foundation started above our garage in Broken Arrow, Oklahoma 15 years ago, and has positively impacted the lives of nearly 44,000 military dependents who deserve and need our help. We witness God’s hand on this ministry and are humbled by the support we receive. I’m so grateful to those who contribute and spread the message of our mission.”

Folds of Honor Tennessee hosts several fundraising events throughout the year to raise funds for the foundation’s scholarship fulfillments. These include Drams ‘N Jams, Rock ‘N Jock Celebrity Softball tournament, and Heroes and Holidays in partnership with John Rich, among many others.

Music editor for Nashville.com. Jerry Holthouse is a content writer, songwriter and a graphic designer. He owns and runs Holthouse Creative, a full service creative agency. He is an avid outdoorsman and a lover of everything music. You can contact him at JerryHolthouse@Nashville.com
Previous Robyn Hitchcock To Release First Full-Length collection In Over Five Years
Next LISTEN: Ian Flanigan’s “Strong”