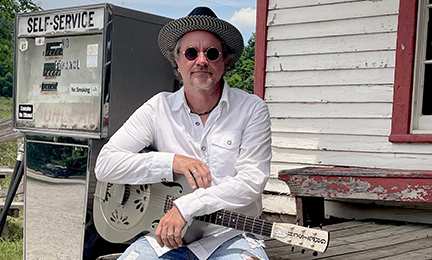 As a writer and producer for the Grand Ole Opry, Bill Filipiak has had a chance to hob-nob with some of the finest Americana artists around. This has been a major influence on his own work. With his latest record, Filipiak taps the inspiration and wisdom of these artists, honing his lifelong passion for music and songwriting into a positive, uplifting and healing folk-blues journey, the aptly titled Medicine I Need. Nashville.com is proud to premiere his new video (above).

“When you have the opportunity to talk songwriting with these people and watch them perform — I’m talking about folks like Larkin Poe, Sarah Jarosz, Molly Tuttle, Bryan Sutton and Allison Russell; artists like Lera Lynn and Maggie Rose, who insist on finding their own path while staying true to who they are; or maybe you spend a couple days with a legend like Keb Mo, George Thorogood or Ray Wylie Hubbard—after that,” Filipiak says, “it’s hard not to pick up your instrument, try to emulate what they’ve done, then come up with your own idea and follow through on it.” says Filipiak.

Much of it written in the throes of the pandemic,” Medicine I Need’s title and subject matter were driven by the deep introspection of quarantine. “I think covid brought all these feelings and realizations to the forefront,” Filipiak says. “We rarely slow down, and we’re often overwhelmed. I think as a culture, we learned a lot about the need to take a step back and look inside, about giving ourselves time to recharge, and that it’s okay to be alone sometimes, which gives us a chance to learn about ourselves.”

For Filipiak—who lost his mother last year, his father five years ago, and his brother-in-law just before that—the reflective time, the powerful medicine of solitude, was much needed. He wrote sweet, heartfelt Americana ballad “My Prayer” as a tribute to his mother, and shell-shocked blues shuffle “Fearing the Dawn” about coping with the reality-shaking revelations that came in the wake of his Father’s death. “Looking back at all the things that happened with my family the last five or six years,” Filipiak says, “there was a lot I needed to work through. This new album gave me the opportunity to do that.”

Throughout his journey, music has always been a constant for Filipiak. As a kid, he was obsessed with the eclectic set of 45-rpm vinyl singles he inherited from his older sisters—records by the Stones & Small Faces, Bubble Puppy & The Strawberry Alarm Clock, Willie Nelson & Waylon Jennings and so many others. A natural, young Bill learned the piano by ear at age three, and went on to play keys and guitar in bands throughout high school and college. “As long as I can remember, I was just enamored with music,” he says. “My sister was playing The Doors’ ‘Hello, I Love You,’ I heard it and that was my first word—“hello.” Most kids sleep with their stuffed animals—I slept with my records. I still have them to this day.”

When he finally struck out on his own, Bill ended up working in radio, including a stint recreating popular tracks piece-by-piece for on-air parodies, an excellent musical education. Years down the road, as his career in the industry took off, he began producing music videos for Americana artists. It put him on the path to his current gig at the Opry, and to the music he’s been making as a solo artist since the laidback blues-folk of his 2016 debut, Put the Top Down, and 2020’s roots-centric Brand New Me. Now, with the blues-injected Medicine I Need, Filipiak, 55, continues his creative journey in earnest.

Music editor for Nashville.com. Jerry Holthouse is a content writer, songwriter and a graphic designer. He owns and runs Holthouse Creative, a full service creative agency. He is an avid outdoorsman and a lover of everything music. You can contact him at JerryHolthouse@Nashville.com
Previous 3rd Annual Charlie Daniels Patriot Awards Dinner Raises $250,000+
Next Breland Makes His Opry Debut