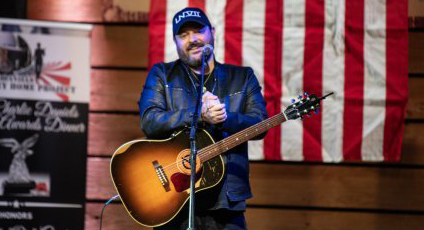 Worley, who also performed his patriotic 9-11 No. 1 hit “Have You Forgotten,” was overwhelmed with the evening. “I was humbled to receive the Patriot Award in the presence of so many veterans that have given selfless service to our nation,” says Worley. “I was so honored to be at the top of Charlie’s list. It all just makes me want to ‘do it better!’”

“This year we were faced with both a physical challenge as well as an emotional one … moving venues as well as trying to do one without Charlie,” explains David Corlew, Daniels’ longtime manager and TCDJHP co-founder. “I quote Charlie in saying, ‘By the grace of almighty God and the United States military,’ we did it. It was an epic evening with friends, family, an awesome group of veterans, warriors and music giants. It couldn’t have been any better, and I know Charlie would be proud.”

Prior to his passing last year, Daniels and Corlew handpicked this year’s Patriot Award recipients. The criteria for the award is based on the mission of the organization: to support veterans in their return, rehabilitation, and reintegration back into civilian life. The award honors a person, persons, or group that fulfills and exemplifies the efforts and dedication of TCDJHP’s purpose to continuously care, support and encourage the men, women, and families who have served our great nation. Previous recipients include Young, Mike Huckabee, Jude Seale, William Horton, Donnie Mingus and The Shepherd’s Center.

Music editor for Nashville.com. Jerry Holthouse is a content writer, songwriter and a graphic designer. He owns and runs Holthouse Creative, a full service creative agency. He is an avid outdoorsman and a lover of everything music. You can contact him at JerryHolthouse@Nashville.com
Previous Belmont Names Ballroom To Honor Alumnus Brad Paisley And Kimberly Paisley
Next PREMIERE: Bill Filipiak’s Uplifting “Hope in Your Heart”