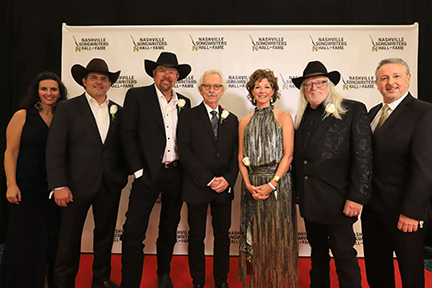 The Nashville Songwriters Hall of Fame welcomed ten new members into its ranks as the Classes of 2020 and 2021 were officially honored last night during NaSHOF’s supersized 50th and 51st Anniversary Hall of Fame Gala. The musical contributions of the newest inductees were celebrated through star-studded performances of some of their biggest songs for the capacity crowd at Nashville’s Music City Center.

The event traditionally features some of music’s most talented artists performing songs from the inductees’ impressive catalogs, and this year’s line-up was no exception.

Trisha Yearwood kicked off the evening honoring inductee Bobbie Gentry in a performance of the hit “Ode To Billy Joe,” a global smash that was also inducted into the Grammy Hall of Fame in 1999. Gentry did not attend the event, and instead Hall of Fame member Gretchen Peters spoke on her behalf.

Carrie Underwood performed her mega-hit “Jesus Take The Wheel” to honor inductee Brett James, accompanied by Hillary Lindsey and Gordie Sampson, the co-writers along with James. Underwood’s recording of this song earned the 2006 Grammy for Best Country Song, as well as the 2005 ACM Single of the Year. “Jesus Take The Wheel” was also named 2006 ASCAP Country Song of the Year and the 2006 NSAI Song of the Year. Nashville Songwriters Hall of Fame member Rivers Rutherford presented James.

Artist Jason Isbell honored inductee Dewey Lyndon “Spooner” Oldham with a performance of “I’m Your Puppet,” which was a Top Five R&B hit for James and Bobby Purify. Oldham, who is also a member of the Rock and Roll Hall of Fame, was presented by Nashville Songwriters Hall of Fame member Dickey Lee.

Kenny Chesney honored inductee Buddy Cannon with a performance of the Cannon-penned Vern Gosdin hit “Set ’Em Up Joe.” In addition to a trio of Vern Gosdin hits, Cannon also wrote the George Strait hit “Give It Away,” which was named the 2007 ACM Song and Single of the Year and also the 2007 CMA Song of the Year. Hall of Fame member Bill Anderson presented Cannon.

Texas native Steve Earle brought an edge to country music in the mid-80s with the release of his critically acclaimed albums Guitar Town and Copperhead Road. To celebrate Earle’s induction, Emmylou Harris performed his song “Pilgrim.” Hall of Fame Board member and host of “The Songwriters” public television show Ken Paulson presented Earle.

As an artist, inductee Toby Keith has placed 45 self-penned Top 20 songs on the Billboard charts, including 16 #1s and 17 more in the Top 10. To acknowledge these accomplishments, Nashville Songwriters Hall of Fame member Ronnie Dunn performed Keith’s 1993 #1 hit, “Should’ve Been A Cowboy,” a song that would go on to become the most played Country song of the 1990s. Hall of Fame member Mac McAnally presented Keith.

And closing the night’s festivities, Nashville Songwriters Hall of Fame member Garth Brooks took the stage to present inductee Kent Blazy and also perform their hit “If Tomorrow Never Comes.” Blazy and Brooks met in 1987 and began writing together. This song was not only their first collaboration, but also became Brooks’ first #1 single. In 1989 it was named NSAI’s Song of the Year.

Music editor for Nashville.com. Jerry Holthouse is a content writer, songwriter and a graphic designer. He owns and runs Holthouse Creative, a full service creative agency. He is an avid outdoorsman and a lover of everything music. You can contact him at JerryHolthouse@Nashville.com
Previous Christmas 4 Kids Announces 2021 Lineup
Next Mandy Barnett Celebrates Being Newest Member Of Grand Ole Opry