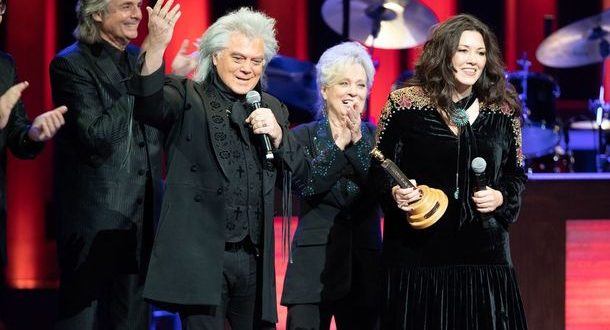 Mandy Barnett, one of the most heralded voices in music and a favorite of Grand Ole Opry fans, was welcomed as the newest member of the Grand Ole Opry last night by Marty Stuart.

Barnett began her set with her very first single, “Now That’s Alright with Me.” She next performed songs from various stages of her career, including “(Won’t You Come Home) Bill Bailey,” which she performed countless times in the role of late Grand Ole Opry star Patsy Cline in the musical Always…Patsy Cline. Barnett was then joined on stage by Patsy Cline’s daughter Julie Fudge, who presented Barnett with an autographed photo of her mom and a canceled check for $50. Fudge explained that the check was written for cash so Cline could make a trip to Houston, where Cline likely spent time with her fan and friend Louise Seger. Cline’s friendship with Seger is at the heart of the long-running musical.

Stuart then took the stage, saying, “You are like our sister, and we all want to be around you at this moment.” Inviting his band and Connie Smith to join him center stage, Stuart continued, “Many meaningful ladies have sung at this microphone, and I can’t think of anyone who was more born for this moment than you. 520 times- that’s how many times you’ve now played the Opry. That’s a long audition! On behalf of the cast, staff, and all the members, we welcome you with open arms and deepest hearts.”

“This is just so unbelievable,” exclaimed Barnett. “I’ve been pinching myself since the birthday invite. This means everything to me. I’ve wanted to be a part of the Opry since I was a little girl. This is just the greatest moment of my life, and I will cherish it.”

“Opry fans and Opry artists alike love Mandy,” said Dan Rogers, Opry vice president, and executive producer. “She has the utmost respect for the Opry and for the great music that has rung across the Opry airwaves for decades. As Connie Smith said when Mandy was invited to become a member, she’s felt like family for years.”

Barnett was surprised on her September 28 birthday with the Opry invitation by Smith. She is scheduled to appear next in each of the Opry’s four “Opry Country Christmas” shows, debuting this coming holiday season at the Opry House on November 28, December 5, 8, and 12.

Music editor for Nashville.com. Jerry Holthouse is a content writer, songwriter and a graphic designer. He owns and runs Holthouse Creative, a full service creative agency. He is an avid outdoorsman and a lover of everything music. You can contact him at JerryHolthouse@Nashville.com
Previous Nashville Songwriters Hall Of Fame Inducts Classes of 2020 & 2021
Next Kenny Chesney Gears Up For Stadium Tour