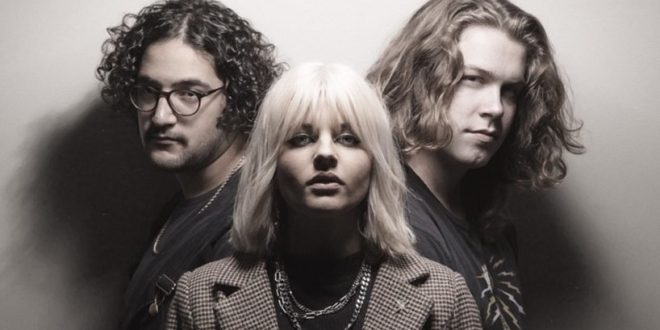 Excited about the new release, lead singer Chelsea Gilliland shares, “In Quantum Physics, Quantum Entanglement is the phenomenon whereby a pair of particles are generated in such a way that the individual quantum states of each are indefinite until measured, and the act of measuring one determines the result of measuring the other, even when at a distance from each other. I thought this phrase describing the relationship of particles perfectly encapsulates the relationship between the two energies that this album is written about. The divine masculine and divine feminine. Falling in and out of love and directly affecting each other, even when at a distance. Only to discover that they are not two separate entities, but one.”

The alt/rock trio, CHLSY, is made up of front-woman Chelsea Gilliland, bassist Sean Swanson and drummer Sawyer Dodds, all of which had a hand in writing and producing their latest single “555,” alongside musician Jon Ezzo. The track is off their upcoming album and comes on the heels of several single releases, including “Garden,” “Vancouver,” two additional songs, “Bones” and “it was all in my head,” and their most recognized track, “No (Hard) Feelings,” which hit over 280K views within the first two weeks of its release and has surpassed 506K views thus far.

Born in Massachusetts and having lived in Spain and California, Gilliland now resides in Nashville, Tennessee, where she graduated from Belmont University with a concentration in songwriting and a minor in the music business. You may also hear her voice as a radio host for the local radio station Yoco Nashville on 96.7FM.

From the inception of the band in July of 2021, Gilliland and her bandmates strive to reignite 90’s sounds with their own modern “dark rock” spin and make music for others to feel seen. She has been working alongside GRAMMY® winning producer with 135+ billboard hits, Dave Audé and co-writing with David “DQ” Quiñones, Chloe Lattanzi, Rachel Levin, and has received accolades including recipient to the John Lennon Songwriting Award in 2017.

CHLSY has since grown their loyal social media fan base to nearly 89K followers and recently supported the Nashville-based rock band The Criticals on tour this past July as they continue to refine their live shows and look to future tour dates following the release of their new album.

Music editor for Nashville.com. Jerry Holthouse is a content writer, songwriter and a graphic designer. He owns and runs Holthouse Creative, a full service creative agency. He is an avid outdoorsman and a lover of everything music. You can contact him at JerryHolthouse@Nashville.com
Previous Adam Hood To Make His Grand Ole Opry Debut October 22
Next Pilgrimage Festival Spot-Lights Local Vendors