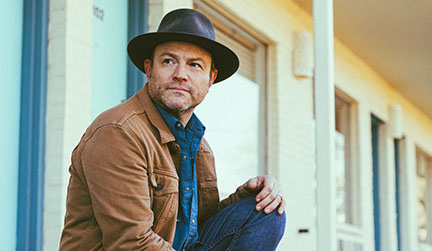 Adam Hood will be making his Grand Ole Opry debut on October 22. While Hood has helped pen songs for superstars like Miranda Lambert, The Oak Ridge Boys and Cody Jinks, who have all graced the Opry stage, this will be Adam’s first time in the Opry circle. Joining the lineup of Opry members Bill Anderson, Lauren Alaina and Dustin Lynch with more to be announced.

When asked about the history of the Opry and how it feels to grace the stage icons like Hank Williams, Loretta Lynn, Clint Black and Carrie Underwood have played on, Hood said, “I pride myself on being a product of my influence, a student of the masters and someone who concerns themself with the craft of songwriting. Everyone who is doing it the best seems to come across that stage at some point in time. It’s one thing to write for these people and it’s an awesome feeling to now be one of those people. This is a nice, solid pat on the back. It’s an acceptance into the industry that we work in and I feel honored to be invited to play.”

Hood’s Opry debut will be on the heels of his fifth studio album release Bad Days Better, out September 16. The album is currently at No. 29 and climbing on the Americana Album chart. “Harder Stuff” featuring Miranda Lambert peaked at No. 12 on the Americana Singles chart and is currently No. 15 at Texas Regional Radio.

Music editor for Nashville.com. Jerry Holthouse is a content writer, songwriter and a graphic designer. He owns and runs Holthouse Creative, a full service creative agency. He is an avid outdoorsman and a lover of everything music. You can contact him at JerryHolthouse@Nashville.com
Previous Jim Lauderdale Releases His 35th Record, Game Changer
Next Nashville Rock Group CHLSY To Release New Album