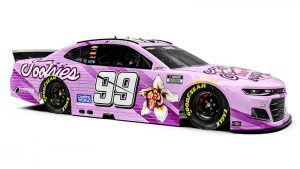 On Sunday, June 26th – the Music City is going to get LOUD. #NASCAR returns to the @NashvilleSuperSpeedway to kick-off the second half of the season, as the world’s best drivers push it to the limit for spots in the Playoffs. Daniel Suárez will once again be behind the wheel of the No. 99 Tootsie’s Chevrolet. Last year Suárez finished seventh in Nashville’s inaugural race. Suárez says he isn’t looking toward the playoffs just yet, there are still regular-season races to be won and that begins June 26 at Nashville Speedway. Before heading to Tennessee, Suárez flew home to Monterrey, Mexico Monday where his family threw a surprise victory party. He hopes that is just the first of many more in 2022 and beyond.

What has life been like since you took the checkered flag for the first time in Sonoma?
“We were in victory lane a long time Sunday celebrating with my team, and some of the Amigos came down to join in. It was a fun flight home although I think we got home at 5:30 a.m. I took my girlfriend to the airport for an 8:30 a.m. flight to Brazil and then I went by the shop to see all of my team before flying to Mexico.”

What was it like when you saw them in Mexico?
“I was so tired but when I got home my mom and sisters had a surprise party for me. Like I said I was so tired, but it was a lot of fun and I am glad they did it.
“The win was great timing. We get to enjoy this for two weeks. But I am sure I’ll be ready to race again by this weekend.”

How important is Nashville?
“It’s very important. We are carrying Tootsie’s Orchid Lounge on our car in Nashville. I think everyone who lives in Nashville or has even been to Nashville knows all about Tootsie’s.
“Nashville is where (team founder and owner) Justin (Marks) lives, (team president) Ty (Norris) live so they is going to have lots of friends and family out. We want to do well every week, but Nashville is special.”

So, be honest. Were you nervous or excited during those final laps in Sonoma?
“I was just trying to stay calm. I knew that it was a big stake on the line, but I was trying to stay calm. I was silent. I wanted to do my thing. I didn’t want too much noise on the radio. I knew what I had to do. I would say after the white flag is when I got out of control. I just start crying inside the helmet, just thinking about. Especially because I had a big gap. If it wasn’t a big gap, I would be focused. Since I had a big gap, I was just thinking about every single moment that has cost me to be here.”

“Thinking of all those things, it makes it very, very, very special.”

Music editor for Nashville.com. Jerry Holthouse is a content writer, songwriter and a graphic designer. He owns and runs Holthouse Creative, a full service creative agency. He is an avid outdoorsman and a lover of everything music. You can contact him at JerryHolthouse@Nashville.com
Previous WATCH: Jason Nix, “Mary Wanna”
Next Marcus King Debuts “Lie Lie Lie”

We love to give back to our amazing visitors at Nashville.com. If you’ve never been …