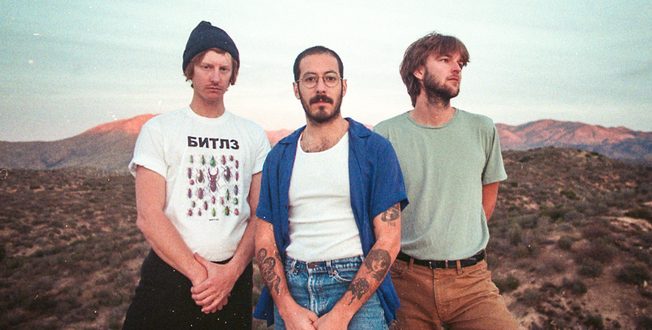 Nashville rock & roll trio Music Band have released their new album’s third single, “Heat.” After some hard earned time off, Music Band are back with a brand new LP, Celebration, out April 3rd on Dine Alone Records, a ten track collection of fuzz-laden rock & roll that finds the group building off of the foundation they’ve built over the last ten years.

Their previous albums, 2014’s Can I Live and 2016’s Wake Up Laughing, garnered critical acclaim and opened the door for extensive tours across the US and Canada alongside JEFF The Brotherhood, Diarrhea Planet & more.

Celebration was written in 2017 as a cohesive collection, self-produced and recorded by the band’s own Duncan Shea at his home in Nashville. The record was mixed by Grammy Award winning engineer Collin Dupuis (Angel Olsen, JEFF The Brotherhood, Ex Hex) and was mastered by John Baldwin (The Rolling Stones, Deer Tick, Jessica Lea Mayfield) at his studio in Nashville. “This album is a very clear snapshot of one year in my life,” says vocalist/guitarist Harry Kagan. “Thematically, we tend to write songs about relationships, relatable stuff, but this record is specific to my thoughts on those topics when I was turning 27. It’s interesting to see this album as encapsulating that time.”

The album kicks off with “Dog,” a slow-burning exploration of late 20s anxiety that sets the tone for the rest of Celebration as Kagan sings, “How did I expect to feel in the dawn / Of my 27th year, am I having fun?” atop organ chords and atmospheric swells of guitar before building to an explosive chorus of, “My heart’s a dog without a master / Distance only makes my heart beat faster.” On “Feel Something,” the band dives headfirst into power-pop territory, showcasing
an exceptional ear for melody and featuring the catchiest chorus of their career.

Music Band formed in 2010 while Kagan, Shea, and Putney were living together as college students in upstate New York before relocating to Nashville the following year. Once in Nashville, the trio embedded themselves in the local underground scene while developing their sound and booking, recording, and promoting their band in true DIY fashion. After a decade, though, Nashville’s scene has changed, but Music Band remain steadfast in their ethos. “When we first moved here, there were so many rock & roll bands just playing basements or wherever, and it was rad to be a part of that and grow with everyone in that wave,” says Putney. “A lot of those bands have moved away or are doing other things now. But no matter what’s happening around us with the scene, we want to be a part of it as we’ve always been. We haven’t ever let anything stand in the way of putting out the music we want to make and following our vision through to the end.”

Music editor for Nashville.com. Jerry Holthouse is a content writer, songwriter and a graphic designer. He owns and runs Holthouse Creative, a full service creative agency. He is an avid outdoorsman and a lover of everything music. You can contact him at JerryHolthouse@Nashville.com
Previous Chris Tomlin’s ‘Good Friday Nashville’ Concert Will Donate All Proceeds To Tornado Relief
Next Travis Tritt Signs New Record Deal