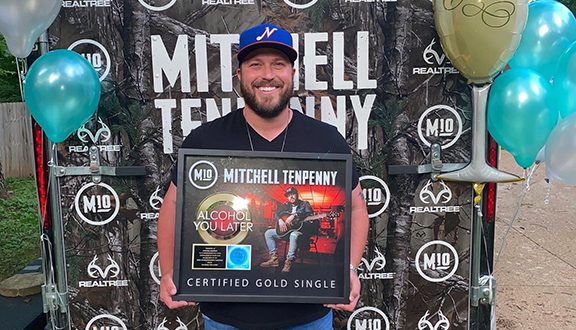 Riser House/Columbia Nashville recording artist Mitchell Tenpenny was surprised last night by the founding member of his Night Owls fan club, Chris, with an RIAA Gold certification plaque for “Alcohol You Later.” The moment occurred on Mitchell’s social channels as he was hosting a Q&A livestream session with his fans as he’s done many times during the Pandemic while live performances are on hold.

“This is how important the fans are!” said Mitchell. “This is 100% the fans gold record and I am forever indebted to those who have given me a career and a chance. Thank y’all from the bottom of my heart.”

Tenpenny’s wrapped the session with a few acoustic performances, kicking it off with “Alcohol You Later.” The singer’s current radio single, “Anything She Says,” released earlier this year featuring rising duo Seaforth, has reached over 55 million on demand streams.

Music editor for Nashville.com. Jerry Holthouse is a content writer, songwriter and a graphic designer. He owns and runs Holthouse Creative, a full service creative agency. He is an avid outdoorsman and a lover of everything music. You can contact him at JerryHolthouse@Nashville.com
Previous WATCH: Lexie Hayden’s “Go To”
Next Listen: Brantley Gilbert Releases Uplifting “Hard Days”