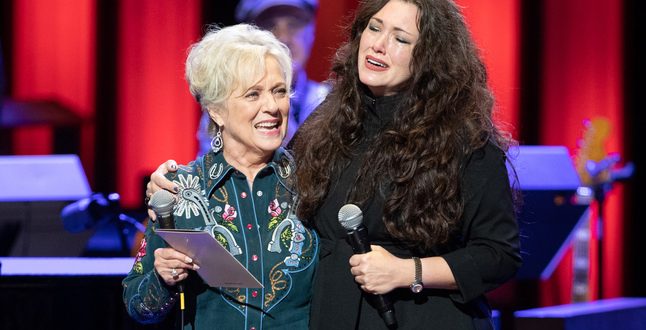 Mandy Barnett, one of the most heralded voices in music and a favorite of Grand Ole Opry fans, was surprised on her birthday today with an invitation to become an official Opry member. Barnett has appeared on the Opry more than 500 times over the course of nearly 30 years. Opry member Connie Smith joined Barnett on stage to lead the Opry audience in “Happy Birthday”, then read a birthday card which included Barnett’s invitation.
“You’ve felt like family since we first met, and on this, your special day, we’re honored to invite you to become an official member of the Grand Ole Opry!” Smith read.

A visibly shaken Mandy said, “This is the happiest day of my life! I came here back in the 80’s and met so many of the greats that came before me like Roy Acuff, Minnie Pearl, Jean Shepard, Billy Walker- and you Connie. I made my Opry debut in 1994 and I’ve had so many supporters who have rooted for me and been nice to me all these years.” “Well, honey you’ve earned it,” exclaimed Smith.

Barnett will be formally inducted into the Opry family later this fall. She is also scheduled to appear in each of the Opry’s four “Opry Country Christmas” shows debuting this coming holiday season at the Opry House.
“Night after night, year after year, we’ve been astounded by Mandy’s magnificent performances. She loves the Opry and the Opry loves her right back. It’s a great match now and will be for years to come,” said Dan Rogers, Opry vice president and executive producer.

Music editor for Nashville.com. Jerry Holthouse is a content writer, songwriter and a graphic designer. He owns and runs Holthouse Creative, a full service creative agency. He is an avid outdoorsman and a lover of everything music. You can contact him at JerryHolthouse@Nashville.com
Previous Stars Align For 2021 Pilgrimage
Next Tootsie’s Will Celebrate 60th Birthday With Free Concert