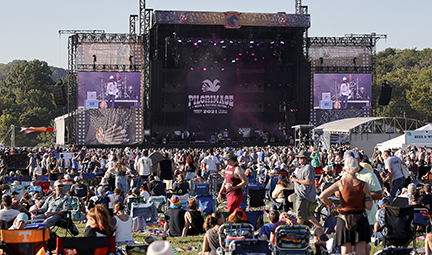 Pilgrimage Music & Cultural Festival brought back the healing power of music to Middle Tennessee this past weekend (September 25 & 26), as the two-day 200-acre event welcomed a crowd of 25K to The Park at Harlinsdale Farm in Franklin, TN. Locally the first music festival of its magnitude in two years, The Tennessean deemed its comeback a “triumphant return” that’s now firmly placed “Franklin on map as a music destination.”

“All the stars aligned for Pilgrimage Music & Cultural Festival this year. We were blessed with a full crowd, brilliant weather, and one of the best lineups that we’ve ever had. It truly seemed like every artist was giving their absolute best, knowing just how meaningful it was to finally be able to bring music lovers together,” shares event co-producer W. Brandt Wood. “People were smiling, kids were dancing, and the music was rocking. We wanted to give everyone a transcendent experience that truly brought joy, and the crowds really came out in mass to celebrate as one community. We’re already counting down until next year!”

Music editor for Nashville.com. Jerry Holthouse is a content writer, songwriter and a graphic designer. He owns and runs Holthouse Creative, a full service creative agency. He is an avid outdoorsman and a lover of everything music. You can contact him at JerryHolthouse@Nashville.com
Previous Richard Lynch – Grandpappy
Next Mandy Barnett Invited To Join The Grand Ole Opry