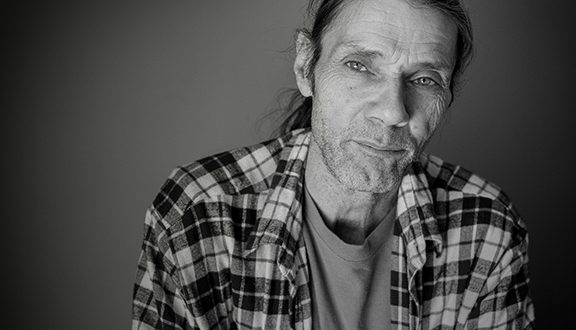 North Carolina-based singer-songwriter Malcolm Holcombe, will release his third album in as many years and his 13th studio album, Come Hell or High Water (Singular Recordings), on September 14. In support of the release, Holcombe will kick off a 25-city tour July 29, at the Grey Eagle in Asheville, NC.
Featuring collaborations with celebrated roots-music couple Iris DeMent and Greg Brown, the 13-track album is trademark Malcolm. Chiseled out of a life abundant in both hard times and sweet ones, with an ache of loveliness and loneliness, of torment and hope, woven throughout, his songs paint vivid portraits, turning them into haunting, brooding, moving affairs.
Recorded at Dagotown Recorders in Boston, MA, Come Hell or High Water was produced by Marco Giovino and Jared Tyler. Holcombe was joined in studio by Jared Tyler (mandola, dobro, classical guitar, harmony vocals), Marco Giovino (drums, percussion), Iris DeMent (harmony vocals) and Greg Brown (harmony vocals). The album closely follows 2016’s Another Black Holeand 2017’s Pretty Little Troubles.
“This world is full of goodness and a lot of positivity, but it seems like I can relate to the underdog and the downtrodden, for obvious reasons,” says Holcombe. “Those types of songs seem to strike a nerve more deeply than the ‘Yellow Brick Road,’ because I think it’s a struggle for all of us to try to do the next right thing. Some people have the spiritual chemistry to be able to achieve that more easily than others, but I think we all struggle with getting up in the morning and trying to live in our own skin.”
Born and raised in the Blue Ridge Mountains of North Carolina, Holcombe is an acclaimed contemporary of Emmylou Harris and Steve Earle, and has shared the stage with Merle Haggard, Richard Thompson, John Hammond, and the late Leon Russell.

Music editor for Nashville.com. Jerry Holthouse is a content writer, songwriter and a graphic designer. He owns and runs Holthouse Creative, a full service creative agency. He is an avid outdoorsman and a lover of everything music. You can contact him at JerryHolthouse@Nashville.com
Previous Halfway to Hazard Announces Nashville-Based Residency at Analog in the Hutton Hotel.
Next Miranda Lambert and Little Big Town Kicked Off “The Bandwagon Tour”