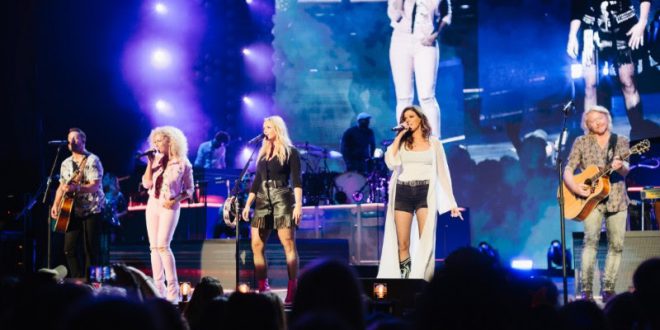 It’s a tour that’s been years in the making as country music superstars and GRAMMY, CMA and ACM Award-winners Miranda Lambert and Little Big Town kicked off their co-headlining The Bandwagon Tour  this weekend, playing to capacity crowds at each of its first three stops beginning Thursday, July 12 at PNC Music Pavilion in Charlotte, North Carolina, Friday night at Cincinnati, Ohio’s Riverbend Music Center and concluding their opening weekend in Indianapolis, Indiana at Ruoff Home Mortgage Music Center Saturday night. With each stop came a once-in-a-lifetime experience for every fan in attendance, as the co-headliners came together to perform a forty-minute finale of each other’s hits.

The joint tour will traverse across the Northeast, Southeast and Midwest regions, making just 17 stops total for fans to see this unique concert experience.

Opening the show is newcomer and Sony recording artist Tenille Townes who appears on all dates on The Bandwagon Tour. For the opening weekend only, Natalie Hemby, who has penned No. 1 hits for both Lambert and Little Big Town, joined the tour. Special guests on the remaining stops of The Bandwagon Tour include Turnpike Troubadours and The Steel Woods for select dates.

Both critically lauded artists, Miranda Lambert and Little Big Town, together tout a combined thirty-six ACM Award wins, twenty-one CMA Award wins and four GRAMMYs. Lambert, who made ACM history when she was named the ACM Female Vocalist of the Year for the ninth consecutive year, recently wrapped up her Livin’ Like Hippies Tour in March and was just announced as the Country Music Hall of Fame  and Museum’s 15th artist-in-residence.

Little Big Town recently hosted a sold-out, year-long residency at Ryman Auditorium and on July 26, the Country Music Hall of Fame  and Museum launched their new, yearlong exhibit called LITTLE BIG TOWN: THE POWER OF FOUR showcasing the bands’ storied and powerful 20-year history within the country music community. Current single, “Summer Fever” is out now and climbing the charts at country radio.

Live Nation is the national tour promoter for The Bandwagon Tour

Music editor for Nashville.com. Jerry Holthouse is a content writer, songwriter and a graphic designer. He owns and runs Holthouse Creative, a full service creative agency. He is an avid outdoorsman and a lover of everything music. You can contact him at JerryHolthouse@Nashville.com
Previous Malcolm Holcombe Set To Release “Come Hell or High Water”
Next Check Out Kacey Musgraves’ New Video “High Horse”