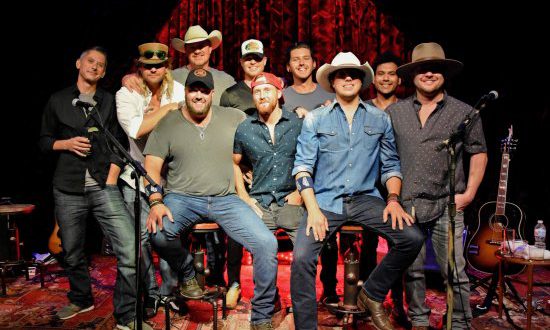 Halfway to Hazard Announces Nashville-Based Residency at Analog in the Hutton Hotel.

Amidst a successful premier show, ACM-nominated country duo Halfway to Hazard has announced an ongoing Nashville-based residency at Analog in the Hutton Hotel.
The monthly series, “Halfway to Hazard & Friends,” kicked off last Tuesday, July 10, with not only a performance by bandmates Chad Warrix and David Tolliver, but the duo also surprised the audience with special guests Chris Young, Radio Romance, American Young’s Jon Stone, Ira Dean (formerly of Trick Pony) and Colt Prather.
“This monthly residency at Analog has given us the opportunity to showcase all of our multi-genre artist, actor, sports personality, and musician friends that we have made over the last 12 years of adventurous travels,” says Warrix. “And, of course, we get to remind people of our music too, plus win over some new fans in the process. It definitely doesn’t hurt that we can do this a couple miles down the road from our own houses here in what seems to be the current most popular city in America.”
“It was great to be back in Nashville playing live… it’s been too long!” states Tolliver. “Having some of our best friends in the business join together onstage makes it that much sweeter. We’re looking forward to the upcoming shows. Analog is a fantastic venue and adds to the audience experience.”
With the residency off to an impressive start, each subsequent show will also feature special to-be-announced guests, who will perform alongside the Hazard boys, as well as other surprises such as a 90s night complete with throwback jams.
The Kentucky-reared duo’s next show is Tuesday, August 7 at 6:00 p.m. Analog at the Hutton Hotel is located at 1808 West End Ave, Nashville, TN 37203.

Music editor for Nashville.com. Jerry Holthouse is a content writer, songwriter and a graphic designer. He owns and runs Holthouse Creative, a full service creative agency. He is an avid outdoorsman and a lover of everything music. You can contact him at JerryHolthouse@Nashville.com
Previous Richard Thompson Set To Return With 13 Rivers
Next Malcolm Holcombe Set To Release “Come Hell or High Water”