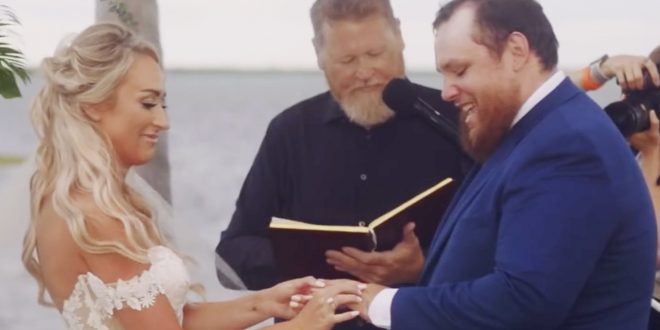 The official music video for Luke Combs’ Platinum-certified single, “Forever After All,” is out now. Watch above. Produced by TA Films, the video shares a special look at Combs’ relationship with his wife, Nicole, including footage from their wedding this past August.

Of the video, Combs shares, “All of my music videos mean a lot to me, but this one is super special since it features a lot of footage from Nicole’s and my wedding. That was the best day of my life and I’m super lucky to be married to my best friend. I definitely got choked up watching it, and it will be something we hold on to and always cherish.”

Currently top 10 at country radio and climbing, “Forever After All” debuted at #2 on the all-genre Billboard Hot 100 chart this past November—the highest entrance ever for a male country solo artist. Combs also performed a special version of the song during the 56th ACM Awards earlier this month—watch HERE. “Forever After All” continues Combs’ triumphant run at radio, following the success of his previous single, “Better Together,” which spent multiple weeks at #1 on both the Mediabase/Country Aircheck chart and the Billboard Country Airplay chart. “Better Together” is Combs’ tenth-consecutive #1 single—a first on Billboard’s Country Airplay chart—as well as his ninth single to spend multiple weeks atop the chart and seventh-consecutive, multi-week #1.

The milestone adds to a groundbreaking and historic series of years for Combs, whose new deluxe album, What You See Ain’t Always What You Get, is out now on River House Artists/Columbia Nashville and debuted at #1 on the all-genre Billboard 200 chart as well as Billboard’s Top Country Albums chart. The special deluxe edition features all 18 tracks from Combs’ double Platinum-certified, global #1 album, What You See Is What You Get, as well as five new songs including “Forever After All.” With the release, Combs reached #1 on Rolling Stone’s Top 200 Albums chart, Top 100 Songs chart and Artists 500 chart—the first country artist ever to lead all three charts in the same week and first to top the Artists 500.

Combs also recently made history as the first artist ever to have their first two studio albums spend 25 weeks or more at #1 on Billboard’s Top Country Albums chart—breaking Taylor Swift’s previously held record at 24 weeks. The achievement comes as What You See Is What You Get topped the chart for the 25th time this past summer, while his 2017 debut, This One’s For You, has spent 50 non-consecutive weeks at #1—tying the record for the longest reign atop the chart with Shania Twain’s Come On Over in 1997.

Music editor for Nashville.com. Jerry Holthouse is a content writer, songwriter and a graphic designer. He owns and runs Holthouse Creative, a full service creative agency. He is an avid outdoorsman and a lover of everything music. You can contact him at JerryHolthouse@Nashville.com
Previous PREMIERE: Rising Star, Ava Rowland’s “Run Like Hell”
Next LISTEN: The Black Keys’ “Going Down South”