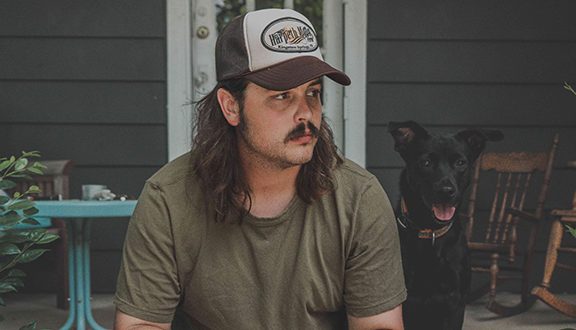 JD Clayton is new up and coming singer/songwriter, but his debut full-length album Long Way From Home, which comes out on January 27th feels like it comes from an artist with years of experience behind him because he is an old soul. Listen to the title track above. JD released his Side A EP ahead of AmericanaFest in Nashville last September where he made himself know. The pandemic had a huge impact on Clayton’s life. He lost his job and found himself joining a landscaping crew to get by, then had his first child not too long ago. Not only did his perspective on life change, but so did his approach to songwriting and the kind of artist he wanted to be. Long Way From Home is the result of that with a simplicity and genuine sincerity running throughout.

During his senior year of college Clayton found, via Instagram, producer Thomas Dulin; the two first met shortly after Clayton graduated and went on to collaborate on his 2018 Debut EP, Smoke Out the Fire. “That was a pivotal moment for me,” he says. “I finally had music I wrote and recorded, from start to finish.” Clayton and his girlfriend (now wife) Claire relocated to Music City in order to capitalize on his upward trajectory. At least until March of 2020.

Clayton co-produced Long Way From Home with Dulin at his studio, The Planetarium, near Nashville’s Berry Hill neighborhood. The 10 tracks reflect the immediate, live-in-the-room approach that marked Clayton’s favorite music, from the acoustic-tinged optimism of “Hello Good Mornin’” to the rustic stomp of “American Millionaire,” the honky tonk swing of “Goldmine,” the anthemic drive of “Heartaches After Heartbreak,” the psychedelic British flavors of “Cotton Candy Clouds” and the classic, Bakersfield-leaning country of “Different Kind of Simple Life.” Clayton’s take on the early 20th century standard “Midnight Special” hails from Creedence Clearwater Revival’s version but with plenty of Clayton’s own stylistic touches. And “Long Way From Home,” sitting smack in the middle of the album that bears its name, finds him speaking directly to his mother about the struggle and quest to make his music career work, declaring that “these dreams of mine just don’t end.”

Music editor for Nashville.com. Jerry Holthouse is a content writer, songwriter and a graphic designer. He owns and runs Holthouse Creative, a full service creative agency. He is an avid outdoorsman and a lover of everything music. You can contact him at JerryHolthouse@Nashville.com
Previous Rising Singer/Songwriter Logan Wall Signs With BMG
Next Barefoot Movement Covers “Have Yourself a Merry Little Christmas”