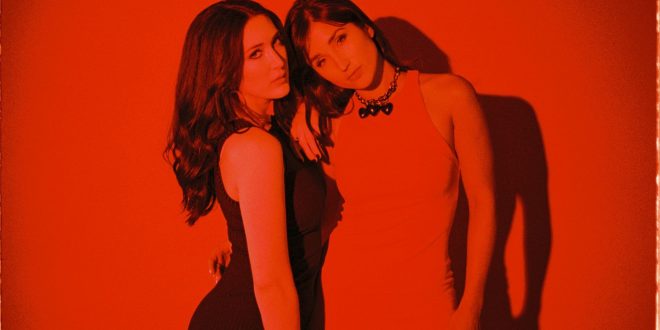 Today, Jackson+Sellers debut their new song “Hush,” a slow burning indie rock single from their forthcoming debut album, Breaking Point, which will be released on October 22 via ANTI- records.

“Hush,” which shares a warning about bad love, was written by Jade Jackson, not long after she first met Aubrie Sellers when she opened for her at a Nashville show. Formed during the pandemic after Jackson approached Sellers via a social media DM, the creative partnership quickly blossomed into a full duo project with Sellers and Jackson, fueled by their desire to write a rock focused record that reflected their expansive musical interests. “Just being yourself in this industry can be considered inflammatory,” Sellers said, adding, “I wanted to push even further into the rock & roll sound I’ve been on the edge of for my last two solo albums.”

Jackson instantly envisioned Seller’s voice as providing the perfect harmony for her new song “Hush.” Discussing the track and origins of the collaboration, Jackson said, “I really loved her voice and asked if she’d be interested in doing a co-write / duet.” She added, “I wasn’t expecting a response but moments after I sent the message she responded with she’d love to. I knew the song would benefit from heavy female vocal harmonies, but working with Aubrie was such a boost. Collaborating with someone who’s so energetically strong, it gives you even more creativity and license to explore.”

Jackson+Sellers’ L.A.-written, Nashville-recorded album is a masterclass in unexpected vocal harmonic convergence, soundtracked by raw guitars, driving drums and a singular pop-rock sound that weaves a sonic thread between 70s rock, 90s raucous roots, and modern indie pop. They exchanged lead vocals, reflecting on their own experiences of vulnerability, isolation, sensitivity and autonomy. They drew on changes in their personal relationships, intuitively capturing each other’s personal experiences, often before they had even discussed them with each other.

Recorded at The Cabin studio in East Nashville in late 2020, Breaking Point was co-produced by Sellers and Ethan Ballinger, with Jackson and Sellers contributing three tracks each and co-writing “Wound Up” with Ballinger. In addition to their own material, they selected deep-cut covers including their first single, a reimagination of Julie Miller’s blistering “The Devil Is an Angel.” They also recorded genre bending interpretations of Suzi Quatro’s defiant “The Wild One,” and Shannon Wright’s raucous “Has Been.”

Jackson+Sellers will be performing on Thursday, September 23, 2021 at Cannery Ballroom in Nashville for Americanafest.

Music editor for Nashville.com. Jerry Holthouse is a content writer, songwriter and a graphic designer. He owns and runs Holthouse Creative, a full service creative agency. He is an avid outdoorsman and a lover of everything music. You can contact him at JerryHolthouse@Nashville.com
Previous Isaacs Officially Inducted Into The Grand Ole Opry family
Next Parker Millsap Tour Kicks Off Tomorrow